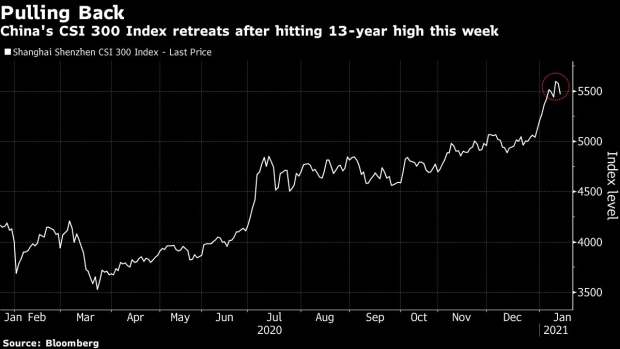 Pedestrians walk on an overpass in the Lujiazui financial district in Shanghai, China, on Monday, Dec. 21, 2020. China’s central bank is striking out on its own with signals of tighter monetary policy, widening a divergence with other large economies that will shape global capital and trade flows next year. Photographer: Qilai Shen/Bloomberg , Bloomberg

(Bloomberg) -- China’s CSI 300 Index fell the most in four months Thursday, pulling back from a 13-year high, as investors rotated into some tech stocks that have lagged the broader market’s recent strength.

The CSI 300 closed 1.9% lower, with the consumer discretionary sector declining 3.8%, the most since July. Meanwhile, the Nasdaq-style Star50 index of companies listed in Shanghai closed 2.8% higher.

Recent gains had put the CSI 300 about 5% below its 2007 record high, raising valuation concerns especially among some high-flying sectors like consumer and electric vehicles. Money has been focused on recent winners, some of which saw sharp declines Thursday. Great Wall Motor Co. fell the 10% limit after having doubled in a month. Shanghai Yuyuan Tourist Mart Group Co. fell by the same amount.

Chinese investors have also been heavy buyers of Hong Kong equities. Daily net purchases via trading links were on track to surpass HK$10 billion for the ninth consecutive day on Thursday, according to data compiled by Bloomberg, the longest streak since the start of the Shenzhen link in late 2016.