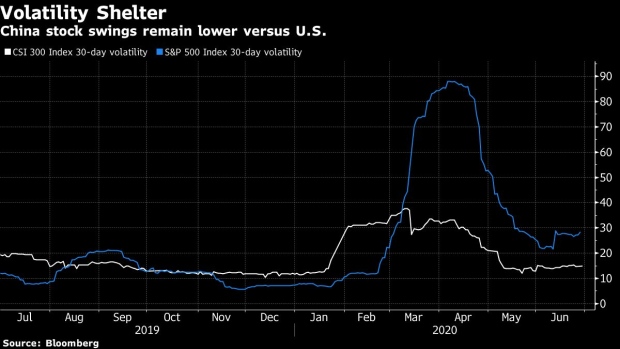 Investors stand at trading terminals in front of electronic stock boards at a securities brokerage in Shanghai, China, on Friday, Oct. 13, 2017. A number of economic indicators show "stabilized and stronger growth" and themomentum of a 6.9 percent expansion in thefirst six months of 2017 "may continue in the second half," Peoples Bank of China Governor Zhou Xiaochuansaid. Photographer: Qilai Shen/Bloomberg , Bloomberg

(Bloomberg) -- Stock investors wanting to preserve capital could do worse than look to China, whose relative stability stands out against the chaos in global markets.

The country’s equities have gone back to the upward grind that has marked past rebounds since a bubble burst in 2015. The calm has allowed the CSI 300 Index to post at least 14 up sessions in June, the most for any month since November 2016. Thirty-day volatility has remained below that of the S&P 500 since early March, the longest stretch in more than eight years, while a gauge of expected swings on a large caps is about 18% lower than the VIX.

That peace prevails in the face of second-wave virus concerns, China’s slowing economy, mounting offshore defaults and a liquidity scare in government debt shows Beijing’s ability to suppress swings in stocks. Chinese investors are betting the rebound will continue, driving margin debt past 1.1 trillion yuan ($155 billion) to the highest since January 2016 last week.

“There’s a good foundation for a continued recovery in stocks, with the government’s efforts in supporting the economy, fighting against the virus and pushing forward with capital-market reform,” said Ma Cheng, chairman at Shenzhen Juze Investment Management Co.

The tranquility versus global markets has been taken by some patriotic investors as evidence of the country’s success in containing the coronavirus (Policy makers and state-backed media have touted that line, too.) Improving sentiment was recently reinforced by assurances from the Trump administration that a trade deal signed in January remains intact, which has helped support the yuan.

Investors are also embracing Beijing’s stronger efforts to boost stock trading and open the nation’s capital markets. Stability in both equities and the currency has attracted interest from foreign investors, who bought a net 52.7 billion yuan of mainland stocks in June. Analysts predict the gains will hold, calling for the CSI 300 to end the third quarter at 4,200 points, or 2.2% above its current level.

There are no shortage of risks in the second half that could end the calm in China’s $8 trillion stock market. Tensions with the U.S. remain a focus for investors, with the planned national security law for Hong Kong being the latest potential flashpoint. Concern is rising over the sustainability of the global rebound in equities, which could flare into greater volatility, especially given the difficulty containing the pandemic.

Elsewhere, a sell-off in China’s government debt has spilled over to the credit market. The yield on five-year top-rated corporate bonds rose to the highest level since January last week. Stress is mounting in Chinese dollar bonds, with debt failures jumping nearly 150% to $4 billion in 2020, even as the picture is calmer onshore.

For now, investors are taking comfort from signs that China’s economy is continuing to recover from the shutdowns earlier in the year. Data Sunday showed the profits of Chinese industrial enterprises rebounded in May for the first time since November 2019. A report Tuesday may show manufacturing activity expanded again in June.

“The economy looks to be in a better state than many had feared earlier,” said Raymond Chen, a money manager with Keywise Capital Management (HK) Ltd. “We are quite optimistic on markets at least before the fourth quarter. The relative calm looks sustainable.”