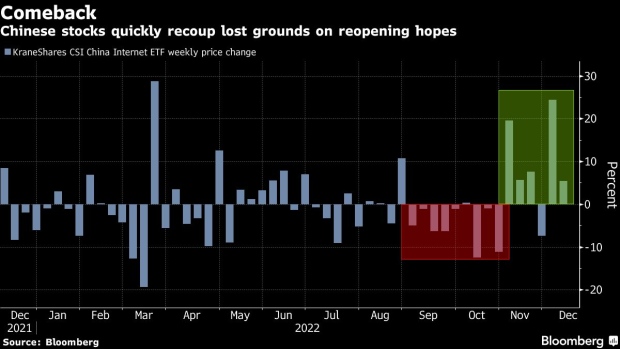 (Bloomberg) -- A stellar rally for Chinese stocks listed in the US shows no signs of slowing with major internet stocks making fresh gains in premarket trading on Friday as steps to relax pandemic curbs gain momentum.

The exchange-traded KraneShares CSI China Internet Fund rose 1.5% before the bell, on track to add to the 71% gain notched up since hitting a record low in October. E-commerce giant Alibaba Group Holding Ltd. gained 0.7% and JD.com Inc. advanced 1%.

Chinese stocks are rising in response to moves by the world’s most populous nation to swiftly unwind a three year-old policy of strict rules aimed at curbing the spread of Covid-19. For now, investors are cheering the prospects for a burst of economic activity and looking past the costs and complications that may come in its wake, including a spike in infection rates.

News that Chinese authorities may further soften their stance of property policies provided a further dose of optimism on Friday. The Communist Party’s top decision-makiing body said earlier this week that it will push for growth and seek a turnaround in the economy next year.

One after another, Wall Street banks have turned more bullish on Chinese equities. Strategists from JPMorgan Chase & Co. were the latest to flag the opportunities offered by Chinese markets, citing favorable monetary conditions and an eventual full reopening. Meantime, Morgan Stanley predicted Chinese stocks would outperform other emerging markets, as it raised its rating to overweight after staying neutral for almost two years.