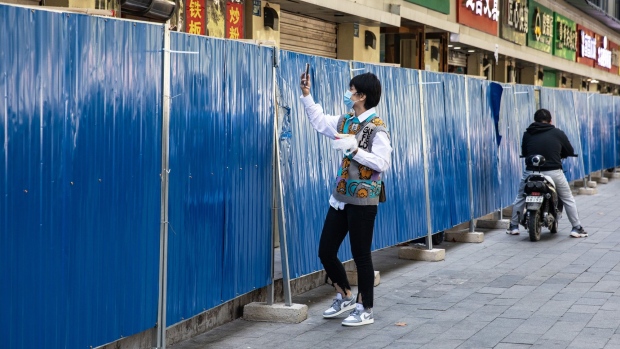 WUHAN, CHINA - NOVEMBER: (CHINA OUT) A resident wears a mask while uses phone scan the code to pay in front of makeshift barricade wall built to control entry and exit to a residential compound on November 2,2022 in Wuhan, Hubei Province, China.(Photo by Getty Images) , Photographer: Getty Images/Getty Images AsiaPac

(Bloomberg) -- Students in China have held a peaceful protest over a university’s Covid Zero rules, a sign of the simmering discontent with the Asian nation’s zero-tolerance approach to the coronavirus.

A video on Twitter showed a group of students gathered on Sunday outside an administrative building at Wuhan University, where they chanted for “an open process and information transparency.”

Weibo posts apparently written by students at the university in the city where the virus first emerged about three years ago said they were unhappy about confusing rules for leaving campus to head for their hometowns and about an exam schedule. Students also said they were upset about continued virus testing and that shops on campus selling food were closed.

The students seemed to avoid crossing any of the ruling Communist Party’s red lines. A message that appeared to be from a protest organizer asked them not to bring blank sheets of paper to the demonstration and to stay away from political topics.

Wuhan University said in a statement on Sunday night that students could choose to stay on campus or go home, and that classes would be resumed in an orderly manner.

Bloomberg News hasn’t been able to independently verify the footage in the clip or the social media posts. The university didn’t respond to requests for comment on Monday.

Protesters took to the streets in cities across China late last month in a rare outpouring of public anger directed at a government that has little tolerance for dissent. Some of them called for President Xi Jinping to step down over the stringent Covid Zero rules.

Protesters also held up blank pieces of paper as a symbol of discontent, mimicking a tactic used in Hong Kong during demonstrations against the national security law passed in 2020.

Several Chinese cities have taken steps to ease Covid Zero rules since the most widespread protests in decades. Police have also been deployed to demonstration sites in Beijing and Shanghai, deterring any further displays of anger.