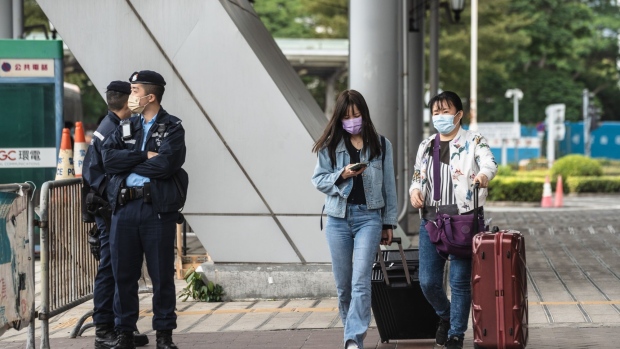 Travelers pass through the Shenzhen Bay Port at Hong Kong’s border with mainland China on the day it reopened. Photographer: Lam Yik/Bloomberg , Bloomberg

(Bloomberg) -- Before the Covid-19 pandemic, China was the world’s largest source of outbound tourists, who took 170 million trips and contributed $253 billion to the global economy in 2019. This year, Chinese travelers are projected to take 110 million international trips, two-thirds of the 2019 level, according to the China Outbound Tourism Research Institute (Cotri), which provides consulting and training on the Chinese outbound market.

The return of Chinese travelers is the economic boost that the global tourism and retail sectors have been missing. According to a sentiment survey compiled in December by data and marketing agency Dragon Trail International, more than half of polled travelers from mainland China indicated that they’d be ready to travel as soon as restrictions are removed, and 32% planned to travel within two years; more than half indicated that they plan to spend more on travel over the next year than they did before Covid.

But there’s a caveat: Destinations hoping to cash in again will need to take a fresh approach that speaks to the Chinese traveler who’s spent three years away from the world. “The Chinese outbound tourist will not be the same as they were before; you have to prepare and adapt for that,” says Wolfgang Georg Arlt, chief executive officer at Cotri. “We have changed; China has changed.”

There’s time to prepare. Chinese tourists aren’t expected to travel far in large numbers until the second half of the year. The China’s group tour package sales ban, enacted in the pandemic’s early days, has yet to lift. Prices are up—way up. Visa processing will be a bottleneck because foreign consulates reduced staff. Major airlines will also need time to resume flights.

“There may be pent-up demand that drives more flights, but the schedules into April and beyond are still quite speculative at this moment,” says Mike Arnot, a spokesman for Cirium, an aviation analytics company. China state television reported that US and Chinese airlines have submitted applications to resume up to 700 flights per week from 34 countries.

Until then, here are five major adjustments that destinations and brands need to consider with regard to global tourism’s biggest market.

A mistake that will prove costly to destinations and businesses is to cling to the dated perception that all Chinese tourists are the same. “Any answer to the question, ‘What are the Chinese people doing?’ is wrong,” says Arlt.

Sienna Parulis-Cook, director of communications at Dragon Trail International, agrees that the travel industry should better prepare for understanding that China’s outbound travel market is not monolithic. “It’s very segmented,” she says. The first wave of long-haul travelers in 2023 will be experienced independent travelers, including millennials, Gen-Z and luxury travelers, adds Parulis-Cook.

While some will visit neighboring Asian countries because they’re easy to get to as well as inexpensive and familiar, others will seek new destinations. “The game is no longer to go where everybody goes but to discover and find new places that not so many Chinese have visited before,” says Cotri’s Arlt.

Directly related to increasing market segmentation will be a diminished role for mass tourism. It won’t disappear entirely, but big-group sightseeing tours will probably appeal only to Chinese travelers from smaller cities who’ve never traveled in the past, says Arlt. Residents from China’s largest cities won’t be impressed with the big tour approach; they will laugh at you, Arlt says. “They’ve had three years’ time to dream about places and read up and talk to people—and look on Mafengwo or Qyer [two Chinese travel-planning sites] for ideas of where to go.”

Live streaming, while not new in China, has also emerged as a trend in tourism marketing, she adds, so showing what life is like in prospective places will prove useful. Nearly two-thirds of Chinese travelers surveyed by Dragon Trail said their top two reasons to travel abroad are to experience local food and local life.

For less-traveled destinations, this will present opportunity. For example, Papua New Guinea is working with Cotri to attract Chinese travelers interested in niche local experiences. Arlt says his firm is also in talks with Canada to create a First Nations program targeting the Chinese market. “All this is moving towards special-interest tourism—smaller groups with a higher spending,” he adds.

After pricing, destination safety ranks as second in importance for Chinese travelers (63%), according to Dragon Trail. That’s not surprising, given the horrific wave of anti-Asian hate attacks globally, including in the US, Canada, Italy, Brazil and New Zealand, since the pandemic. The safety factor will be critical for the first wave of Chinese independent travelers before mass tours resume; the latter at least offer the ability to feel more secure in a crowd.

More than two-thirds of Chinese travelers ranked the US as the destination they consider least safe to visit as of December, according to Dragon Trail. Other bottom-rankers in the survey: Israel, Peru, Chile, the UK and Spain.

“Chinese people are very sensitive if they are welcomed or not, because they see themselves not as Mr. Lee or Mrs. Wong but as Chinese—and what you do to them, you do to the Chinese,” says Arlt.

Discover Los Angeles, for example, formed a community advisory board to represent various diverse groups during the pandemic, including Asian American Pacific Islanders (AAPI). The AAPI volunteers visited a variety of stakeholders in the city to ensure that these businesses emphasize in their communications that diverse visitors can feel safe and welcome in LA.

Even a slight perception that Chinese travelers could be subjected to racial abuse in a place and treated badly because they are Chinese, Arlt says, will have consequences. Chinese visits to the US dropped by close to 11% from 2017 to 2019 during the Trump administration, which was hostile to China.

Tourism boards know to lay out the welcome carpet, and hotel managers will have to be conscious about training frontline workers to receive Chinese travelers after such a long pause. But the average resident’s attitude towards Chinese people will be more critical now, Arlt says. Tourism boards will have to do more marketing and education to improve general host perceptions, in addition to communicating that they are happy to have Chinese visitors back and to factor in ways to prevent incidents.

“This is really a chance to make a new first impression,” says Parulis-Cook. “Those first travelers’ experiences may have more influence on the travelers that come after them. So it’s an important moment.”

Before the pandemic, bragging about big spending was considered impressive, Arlt says, but what’s deemed impressive now is spending on experiences and learning by having done something, not merely flashing wealth. Value for money has become important to Chinese travelers, especially considering the increased costs of travel and the absence of discount tour packages.

Previously popular destinations such as Los Angeles are receiving a much greater percentage of families traveling with multiple children, as well as a shift in demand from millennials and members of Gen-Z, such as groups of friends planning independent travel. “What they’re looking for is the authentic LA,” says Adam Burke, chief executive officer at Los Angeles Tourism & Convention Board, who adds that they look at what a local would do and seek to explore LA’s neighborhoods in much more detail.

Travelers from China have also shown a greater willingness to pay more for greener choices than their European and American counterparts. Among Chinese travelers, 88% say they care about their impact on destinations and communities when traveling, according to Dragon Trail’s survey. For most Chinese travelers, the survey further reveals, sustainability could mean choosing a hotel with such environmentally friendly practices in place as water conservation and waste reduction, cycling instead of driving, supporting activities that help preserve disappearing local cultures, and choosing cruelty-free ways to see animals.

Covid testing is no issue for the Chinese, who are used to it. But simplifying the visa process—providing an e-visa, a visa on arrival or requiring none at all—would attract more Chinese travelers. Convenience ranked as the third-most-important factor in the Dragon Trail survey.

That makes destinations such as the United Arab Emirates, Jordan, Qatar, Turkey and Ecuador, among others, well positioned to receive Chinese visitors this year. South Korea and Japan, destinations popular among Chinese travelers, are in a pickle for having imposed severe entry restrictions on Chinese travelers; China has retaliated with visitor visa bans.

“The visa wait times are going to be the single greatest impediment to the recovery of Chinese visitation to the US,” says Burke, who also sits on the US Travel Association’s board and was just named to the Department of Commerce’s US travel and tourism advisory board.

Despite the view that the US is least safe, America’s brand remains strong among Chinese travelers. Searches from China about visiting the US were among the highest in January, according to online travel agency Trip.com, though the average wait time for a visa is about 400 days for non-waiver countries, Burke says. The Visitor Visa Waiver Reduction Act was introduced last October to demand that the State Department lay out specific steps being taken to reduce the wait time.

Still, as long as immigration and other entry impediments remain, Chinese travelers may choose to steer clear of those destinations. “One thing is the convenience,” says Parulis-Cook, “and one thing is the feeling of friendliness and welcome.”