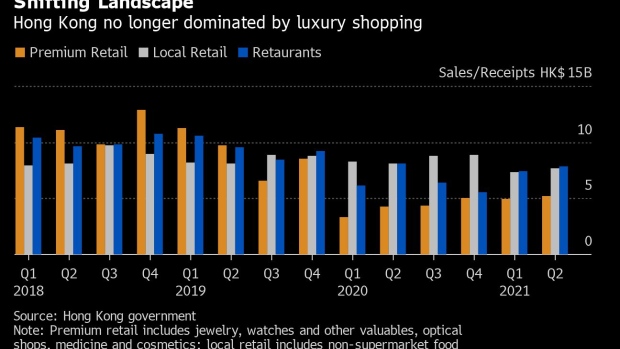 (Bloomberg) -- Luxury retail chains are losing their once-iron grip on Hong Kong’s shopping streets, as Covid-19 keeps visitors away and forces the city to shift toward restaurants and bars catering to residents.

Across the Asian financial hub, one in five shops targeting mainly Chinese tourists and selling jewelry, medicine, cosmetics, clothing and leather goods has closed since the third quarter of 2018 -- before pro-democracy protests and the pandemic dealt blows to the city’s economy -- according to data from the research arm of real estate agency Midland IC&I Ltd.

The number of restaurants and food grocery outlets, by comparison, has grown 9% during the same period.

The trend is being felt in some of the most bustling shopping districts. At Sai Yeung Choi Street South in Kowloon, once a hotspot for mainland tourists, six new restaurants and bars have opened during the period while 12 cosmetics and personal care shops have shut down. Percival Street in central Hong Kong has seen five watch and jewelry shops shut since the third quarter of 2018, and added one food and drink business.

The shift has been a rapid one, given the typical life of a city. The protests -- portrayed in Beijing-backed media as violent and targeting mainlanders -- led to the disappearance of Hong Kong’s biggest source of tourists almost overnight. The city’s zero-tolerance approach to the virus, which includes quarantines of up to 21 days, has meant they’ve still not returned. While the government is trying to ease border curbs with the mainland, the lack of a plan to reopen more broadly means Hong Kong risks falling behind other financial and shopping capitals, from Singapore to London.

In some ways, the pivot toward retail that caters to the city’s 7.4 million residents -- from long-time locals hunting dim sum to cashed-up expats on a night out -- marks a correction. The mainland’s growing footprint on Hong Kong, driving more stores catering to tourists than residents’ needs, was one frustration fueling the protests in 2019.

“There’s been a big rebalancing toward local spending,” Jonathan Zeman, Chief Executive Officer of Lan Kwai Fong Group, a major landlord in Hong Kong’s nightclub district, told Bloomberg TV in an interview. “People who normally would fly around to Tokyo, Bangkok, Paris, they can’t do that now so they’re happy to find ways to spend locally.”

Ever since Covid-related restrictions on eateries started to ease in February, the food and drinks business has been bouncing back, driven by strong local demand, he said. Lan Kwai Fong’s overall occupancy rate has climbed back up to 98% and its catering businesses have returned to 2018 levels, Zeman added.

Before the pandemic, outlets of Luk Fook Holdings International Ltd., one of Hong Kong’s major jewelry chains, relied on mainland tourists for 60% of their business. Now, Luk Fook is one of the premium retail brands rolling out perks and upgrading services in an intensifying competition for what is a smaller group of local shoppers.

Luk Fook is partnering with a local e-commerce platform and setting up its own online shopping website, said Chief Financial Officer Kathy Chan. It’s cut some stores in major tourist districts and added new ones in local residential areas. And it’s rolling out lucky draws and vouchers to lure in customers, pegged to its 30th anniversary.

Signs for rival Chow Tai Fook Jewellery Group Ltd. compete with Luk Fook’s on shopping thoroughfares across the city, and its Hong Kong operation once counted on tourists for half of its sales pre-pandemic. Now it’s joined Luk Fook in the battle to draw Hong Kongers through the door.

The company -- whose retail revenue in Hong Kong and Macau has plunged 60% in the two fiscal years since March 2019 -- has added Instagram spots at its stores to appeal to younger customers, said Executive Director Peter Suen. It’s also targeting quicker delivery.

A government initiative to hand out HK$5,000 ($642) worth of spending vouchers to eligible residents to support local businesses amid Covid will last through mid-2022. It has also prompted a number of companies to compete for customers flush with extra cash, Suen said.

The shift could last even after borders reopen and travel resumes, with mainland tourism likely still hindered by political concerns and challenges from e-commerce, said Emily Leung, a senior analyst at Euromonitor International in Hong Kong.

Some Chinese tourists who would previously come to Hong Kong to shop, particularly for luxury goods, might have already discovered online channels for those products during the pandemic, she said.

“In the coming three to four years, the share of local spending in Hong Kong’s retail industry will continue to be higher than before,” Leung said. “Tourist spending will recover, but it would be quite difficult for it to return to the 2018 levels after the past two years.”