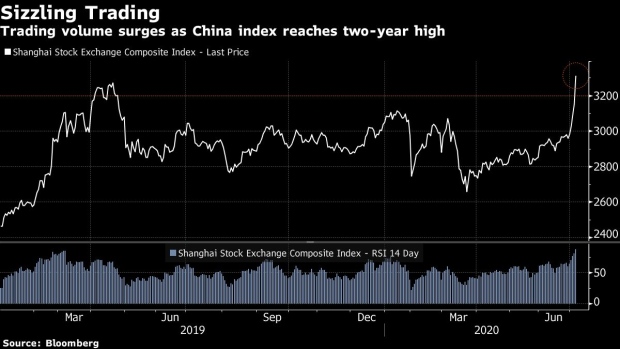 Several trading apps of key Chinese brokers are struggling to keep up as millions of the country’s mom and pop traders race to seek a quick buck in a surging market.

The glitches came as trading volume in the mainland stocks boomed, hitting a five-year high and totaling 3.2 trillion yuan ($455 billion) in the first two days of the week, according to data compiled by Bloomberg.

Chinese stocks have been on a tear, helped by local media boosterism as the world’s second largest economy seeks to shake off the coronavirus crisis. A front-page editorial in the Securities Times on Monday said that fostering a “healthy” bull market after the pandemic is now more important than ever. It was a bit more cautious on Tuesday, urging investors to be aware of risks.

The brokerage industry is surging. A Bloomberg index of Chinese brokers has climbed 17% so far this year, compared with Shanghai benchmark’s 9.7% gain.

Chinese investors are loading up on leverage to speculate in the stock market at the fastest pace in more than five years. They pushed outstanding margin debt on domestic exchanges to more than 1.2 trillion yuan as of Monday. The figure rose 3.2% from July 3, the biggest increase since January 2015.

China’s stock market has also been helped by a drumbeat of good news, including the first revamp of the Shanghai Composite Index in three decades. The revision, which set to give more weighting to fast growing high-tech economy, is expected to boost the index in long run, people familiar with the matter told Bloomberg earlier.

The Shanghai composite rose 0.4% on Tuesday, after a 5.7% surge on the first day of the week.

Some users have encountered slowness in checking the pricing of their financial assets and money transfers, while other functions including online trading are operating normally, Guotai Junan said in a statement. Huatai didn’t immediately respond to a request seeking a comment.