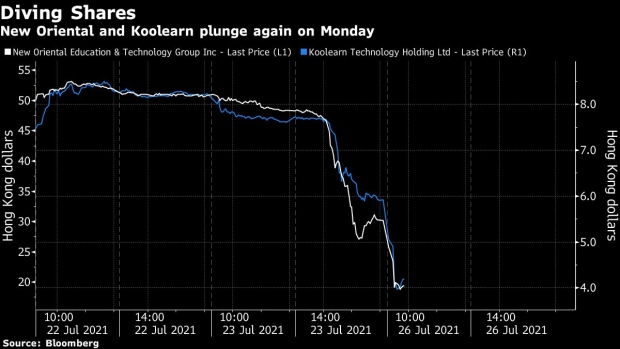 (Bloomberg) -- A selloff in Chinese private education companies accelerated after Beijing announced reforms that rendered them “un-investable,” according to analysts.

New Oriental Education & Technology Group Inc. plunged as much as 40%, extending Friday’s record 41% fall and after its U.S. traded shares dropped 54%. It warned in a Monday stock exchange filing that the regulations will have a material adverse impact on the company. Koolearn Technology Holding Ltd. tumbled as much as 35%, while China Maple Leaf Educational Systems Ltd. dropped 16%.

Chinese regulators on Saturday published reforms that will fundamentally alter the business models of private firms teaching the school curriculum, as Beijing aims to overhaul a sector it says has been “hijacked by capital.” The new regulations ban firms that teach school curriculums from making profits, raising capital or going public. Friday was already a bloodbath for the sector in both Hong Kong and the U.S., after a document on curbing tutoring firms from going public circulated on social media.

The “worst-case became a reality,” said JPMorgan Chase & Co. analysts including DS Kim in a note dated Saturday, saying it was uncertain whether the companies could remain listed under the new regime. “It’s unclear what level of restructuring the companies should undergo with a new regime and, in our view, this makes these stocks virtually un-investable.”

There are more than 20 education companies that are listed in Hong Kong with a combined market cap of HK$187 billion ($24 billion) after Friday’s drop. Short selling volume of the biggest education firm, New Oriental Education, surged by more than 8,000% on Friday, data compiled by Bloomberg shows.