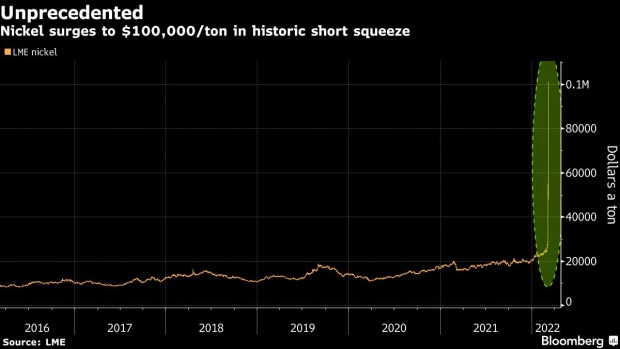 (Bloomberg) -- A Chinese tycoon who built a massive short position in nickel futures is facing billions of dollars in mark-to-market losses after the metal surged more than 170% in two days, according to people familiar with the matter.

Xiang Guangda -- who controls the world’s largest nickel producer, Tsingshan Holding Group Co., and is known as “Big Shot” in Chinese commodity circles -- has closed out part of his company’s short position and is considering whether to exit the wager altogether, the people said. Nickel rocketed to a record high above $100,000 a ton on Tuesday, driven in part by Tsingshan and its brokers’ activity, before trading was suspended.

While the exact scale of Xiang’s losses is unclear, Tsingshan’s short position on the LME is in the region of 100,000 tons of nickel, people familiar with the matter said. It could be even larger than that when positions taken through intermediaries are taken into account, people separately said. That means it would have suffered well over $2 billion of daily losses at the most extreme point of nickel’s surge on Monday.

That would come on top of any losses incurred by the tycoon since he began building the short position late last year through closely held Tsingshan.

It’s the latest twist in a sudden market drama that prompted the London Metal Exchange to suspend nickel trading on Tuesday. Prices were driven dramatically higher as holders of short positions were forced to close them out because they couldn’t meet margin calls.

Clearinghouses ask brokers to deposit cash, or “margin,” on a daily basis to cover potential losses on their clients’ positions. If the market moves against those positions, the clearinghouse makes a request for further funds.

Tsingshan itself has been struggling to pay margin calls to its brokers, according to people familiar with the situation. It’s been under growing pressure to meet the payments in recent days, the people said.

Earlier, the 145-year-old LME also gave one of Tsingshan’s brokers -- a unit of a state-owned Chinese bank -- more time to pay a margin call on hundreds of millions of dollars that it missed Monday. Those payments have now been made, a person familiar with the matter said.

Tsingshan, among other Chinese companies, is ramping up a wave of new battery-grade nickel capacity in Indonesia. Xiang began building the short position in part because he wanted to hedge rising output, but also because he believed a nascent rally in nickel prices would fade this year.

Instead, prices have skyrocketed. An early-year rally on robust demand and low inventories has been supercharged as Russia’s attack on Ukraine unleashes what Citigroup Inc. calls “transformative” changes for commodity markets.

Nickel surged as much as 111% on Tuesday, and trading was paused with prices at $80,000 a ton. Nickel is used in electric-vehicle batteries, making it a critical ingredient in the fight against climate change.

In assessing the unusual situation in nickel, some traders also point to the influence of an unidentified stockpiler who controlled somewhere between 50% and 80% of nickel warehouse warrants monitored by the LME as of last month.

Trading and mining giant Glencore Plc was the dominant holder of nickel in recent months, according to people familiar with the matter. A Glencore spokesman declined to comment.

There is so far no indication that the loss would impact Tsingshan’s ability to operate, people familiar with the matter said.