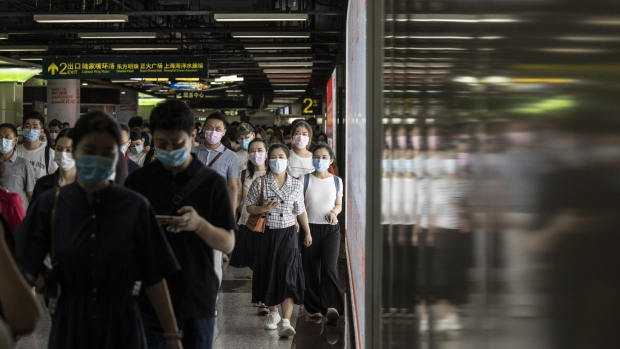 Commuters wearing protective masks make their way through a subway station during the morning rush hour in Shanghai, China, on Friday, Aug. 6, 2021. China is facing a delta-driven coronavirus resurgence that's grown to more than 500 cases scattered across half the country. Photographer: Qilai Shen/Bloomberg , Bloomberg

(Bloomberg) -- A group of private sector employees in China have begun an online campaign to gather their working hours in a protest against the excessive work culture in the country.

The so-called Worker Lives Matter campaign is asking employees in various industries like technology and finance to share what time they start and end their workday as well as how many days they work per week. As of Thursday, the spreadsheet had more than 4,000 entries, including contributions from within tech giants like Tencent Holdings Ltd., Alibaba Group Holding Ltd. and ByteDance Ltd.

The country’s grueling work pace -- known as “996” because employees often labor from 9 a.m. to 9 p.m. six days a weeks -- was long celebrated by tech billionaires from Alibaba’s Jack Ma to JD.com Inc. founder Richard Liu. But it’s come under renewed scrutiny this year, fueled by deaths associated with overwork and a growing chorus of social media complaints. With President Xi Jinping calling on the country to work toward “common prosperity,” authorities have stepped up warnings against employers to refrain from unreasonable overtime and other violations.

“We workers also need to live!” declared the campaign’s page on the software collaboration site GitHub.

The latest campaign echoes an earlier effort by tech employees to protest long working hours. In 2019, a group of Chinese programmers took to GitHub to banish startups accused of mistreating employees from using their open-source code.

In response to growing public pressure, internet companies including ByteDance and Kuaishou Technology have taken initial steps to dial down working hours. Earlier this year, the two short-video giants canceled an alternating system where employees take just one day off per week every two weeks.