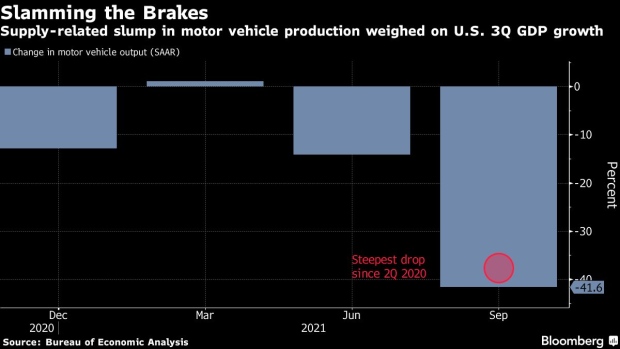 (Bloomberg) -- The U.S. economy had some car troubles in the third quarter.

Personal consumption slowed sharply, due in part to a drop in outlays for cars, Commerce Department data showed Thursday. That subtracted 2.39 percentage points from gross domestic product growth and drove the decline in goods spending in the period, as automakers had a tough time keeping dealer lots full.

Motor vehicle production for the period dropped an annualized 41.6%, the most since a pandemic-related collapse in the second quarter of last year, the report showed. Third-quarter GDP excluding auto output rose at a 3.5% pace.

Automakers are struggling to meet consumer demand as a persistent shortage of semiconductor chips stymies production. And those constraints aren’t expected to go away any time soon.

“Right now, you ask us what we think the sequential increase in supply will be year-over-year, we think we’ll have about 10% more, but that’s changing weekly,” John Lawler, chief financial officer of Ford Motor Co., said of semiconductor supply during the company’s earnings call Wednesday.

“But we do see that running through 2022, it could extend into 2023, although we do anticipate the scope and severity of that to reduce as we move through ‘22 into ‘23.”

“It will linger into next year and right now our feeling is that we’ll be in much better shape in the second half of 2022,” she said.