Battered in the June selloff that sent American equities into a bear market, chipmaker stocks are staging a stunning rebound this month.

Bolstered by evidence that supply-chain issues are easing and demand is growing, the Philadelphia Stock Exchange Semiconductor Index has surged 18 per cent since July 1, handily outpacing the broader market rebound after the group’s valuation sank to the lowest level in three years.

Earlier this month, Taiwan Semiconductor Manufacturing Co. announced better-than-expected quarterly results, while Samsung Electronics Co. reported a 21 per cent jump in revenue. On Wednesday, data for mobile phone shipments from China showed a jump of 9.2 per cent in June, with overseas vendors like Apple Inc. leading demand. Meanwhile, the US Senate is advancing a US$52 billion bill that would provide subsidies for the semiconductor industry.

Investors had previously soured on companies such as Marvell Technology Inc., Micron Technology Inc. and Advanced Micro Devices Inc. after the Federal Reserve’s restrictive policies threatened to plunge the economy into recession, which could dampen demand for many of the products that employ chips from phones to cars. But US consumer spending remains strong, and shopping interest appears to be increasing following the lifting of COVID lockdowns in major hubs such as Shanghai and Beijing.

“These stocks have all fallen quite a bit, and their P/Es are near the low end of their typical range,” said Shaker Investments analyst Ray Rund. “I think the drop we’ve already seen suggests a lot of fears are priced in.”

Popular chips stocks have rallied recently as some dip buyers found their lower valuations attractive, Rund said. Advanced Micro Devices and Nvidia Corp. are on track to climb for seven straight sessions. “Better-than-feared” earnings from tech companies could be driving the optimism, according to Richard Bernstein’s Dan Suzuki. Firms including Qualcomm Inc. and Intel Corp. are set to report earnings next week.

“As investors look to investing in the market in these tough times, they are looking for areas which are still providing opportunity,” Fiona Cincotta, senior financial markets analyst at City Index Ltd. “Businesses will be looking to update operations for cloud computing and AI, and that I think will help drive the chip manufacturers and demand for those stocks higher.” 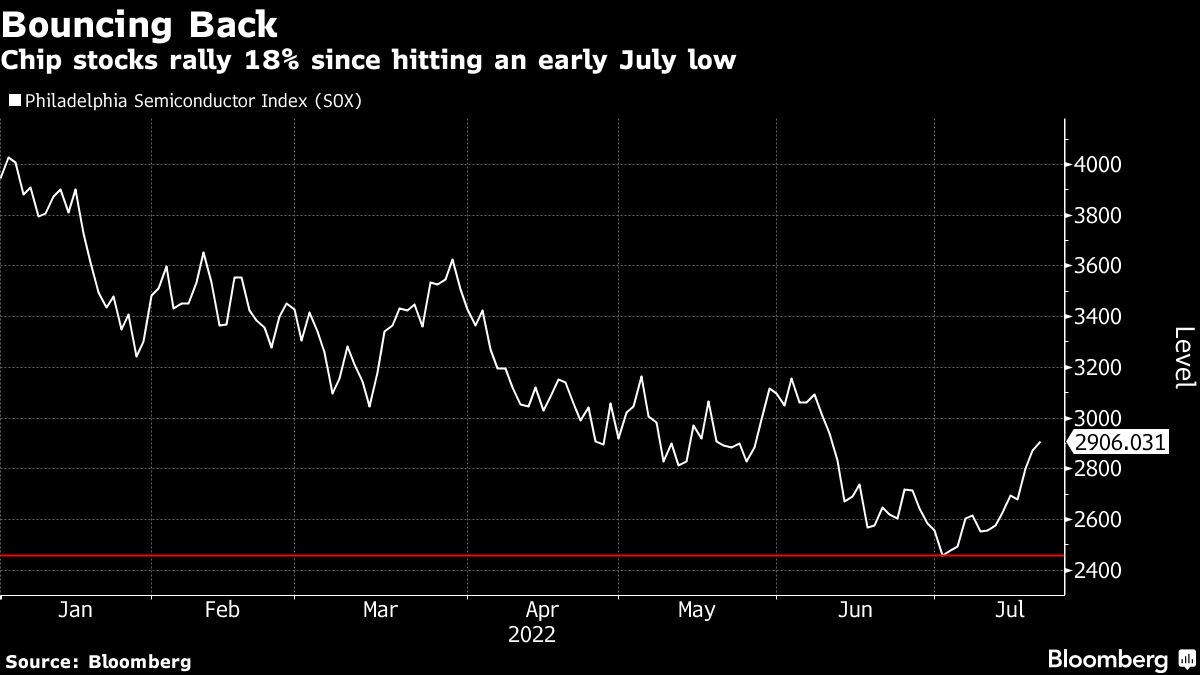 But while chip stocks carry some defensive qualities as supply constraints ease, traders should be mindful that chip investment is a long-term process, said Max Gokhman, chief investment officer for AlphaTrAI Funds.

“They are defensive in the sense that they’re manufacturing a good that’s seeing secular acceleration in demand amid constrained supply,” Gokhman said. “You need to spend billions and years to build more plants to increase global production capacity, so it’s not as simple as just pumping more oil for instance.”