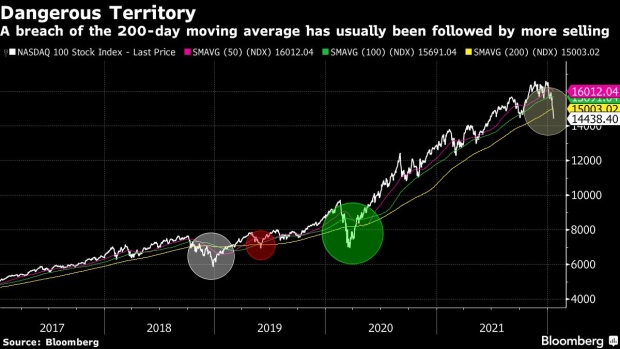 (Bloomberg) -- If any group should be holding up well in the selloff that’s ripping through technology stocks, it’s semiconductors.

Analysts predict chipmakers will report strong growth in fourth-quarter profits amid a global shortage, and their stocks in aggregate sell at a discount to the Nasdaq 100 Index. Yet the Philadelphia Semiconductor Index is off to its worst start to a year since 2008, as the stocks get swept up in fears about rising interest rates that have weighed on the tech sector.

Bulls on the sector say earnings this week from companies like Texas Instruments Inc. and Intel Corp. could shift the focus back to fundamentals for the group, which remain attractive. Demand is off the charts, with everyone from mobile-phone makers to car companies struggling to source enough chips for their products.

“I expect they’ll have pretty good earnings and solid numbers, but that doesn’t mean the overall market volatility and gyrations won’t take a toll,” said Carter Henderson, a portfolio manager at Fort Pitt Capital Group. “A lot of investors are taking any chance they can get to rotate out of tech and into more value-based sectors.”

The Philadelphia index, known as the Sox, is down 13% this year versus a 12% drop for the Nasdaq 100. The chip gauge closed Friday just above its 200-day moving average, which hasn’t been breached since the start of the Covid-19 crisis.

The benchmark is priced at about 18.5 times profits projected over the next 12 months. The average over the past decade is 16.2 times and the Nasdaq 100 is priced at 25 times.

Chip stocks had been one of the most reliable money-making trades until this year’s stumble, gaining more than 40% in each of the past three years. While they don’t carry the stratospheric valuations of some tech high flyers, they’re still vulnerable in the short term to the jump in bond yields.

“Rising rates are the biggest risk to semi industry valuation for CY22 in our view, leading to a potentially weak” first quarter, said Vivek Arya, an analyst at Bank of America Corp., who remains bullish on the group due to its “unique mix of growth and profitability.”

Semiconductor-related companies in the S&P 500 are projected to deliver fourth-quarter profit growth of 24%, according to estimates compiled by Bloomberg Intelligence. While that’s down from the 57% expansion in the third quarter, it’s better than the 15% expected for the tech sector as a whole and 5% for the megacap cohort of Apple Inc., Microsoft Corp., Alphabet Inc., Amazon.com Inc. and Facebook parent Meta Platforms Inc.

Taiwan Semiconductor Manufacturing Co., Apple’s most important chipmaker, this month projected average sales growth of 15% to 20% annually -- as much as double its previous expectation.

“We expect 2022 to be another strong expansionary year in the semiconductor industry,” KeyBanc Capital Markets analysts John Vinh and Jim Long wrote in a research note on Thursday, citing broad end-market demand and pricing and inventory levels that they see as healthy.

The Nasdaq 100’s 7.5% decline last week sent the benchmark index below its 200-day moving average for the first time since March 2020. In the past five years, when that moving average has been breached, it has more often than not been followed by deeper losses. Futures on the index fell 0.4% at 6:26 a.m. in New York.