A string of warnings on semiconductor demand from the likes of Micron Technology Inc. and Samsung Electronics Co. is forcing analysts to slash earnings forecasts at the fastest pace since 2008.

Having gone from boom to bust in less than a year, the semiconductor industry is now bracing for a storm that’s expected to hit everyone, from producers of memory chips to semiconductor-equipment makers and manufacturers of computer processors. The benchmark Philadelphia Semiconductor Index has fallen 42 per cent this year, on track for its worst annual performance in 14 years as demand falls off a cliff.

The global personal computer market saw its steepest decline on record in the third quarter, according to Gartner, as economic uncertainty and a glut of unsold inventory dented shipments for the fourth straight quarter. Ominous signals are also coming out of early chipmaker forecasts as they find themselves saddled with excess inventory: Samsung, Micron and Advanced Micro Devices Inc. were the latest to issue warnings.

Profit expectations have fallen 16 per cent in the past three months, according to data compiled by Bloomberg, and Citigroup Inc. analysts see more pain coming and expect the Philadelphia index to fall further as the crisis gains steam.

“Strap on a helmet –- it will likely get worse,” said Christopher Danely, an analyst at Citigroup who expects NXP Semiconductors NV and Texas Instruments Inc. to both report weakness in bookings. “This is just the beginning of the downturn and every company/every end market will feel it.”

While valuations have taken a beating, they’re still above the lows of previous market cycles, supporting the firm’s view that the stocks have further to fall. The Philadelphia index, known as the SOX, is priced at 13.3 times estimated earnings, versus a low of 11.3 in 2018.

Nvidia Corp., whose chips are a staple of high-end gaming computers, has lost about US$544 billion in market value from its November peak. The SOX was down two per cent on Tuesday, touching a near two-year low.

“This slowdown is dramatic and pointing towards rapidly deteriorating demand for consumer electronics,” wrote Peter Garnry, head of equity strategy at Saxo Bank. 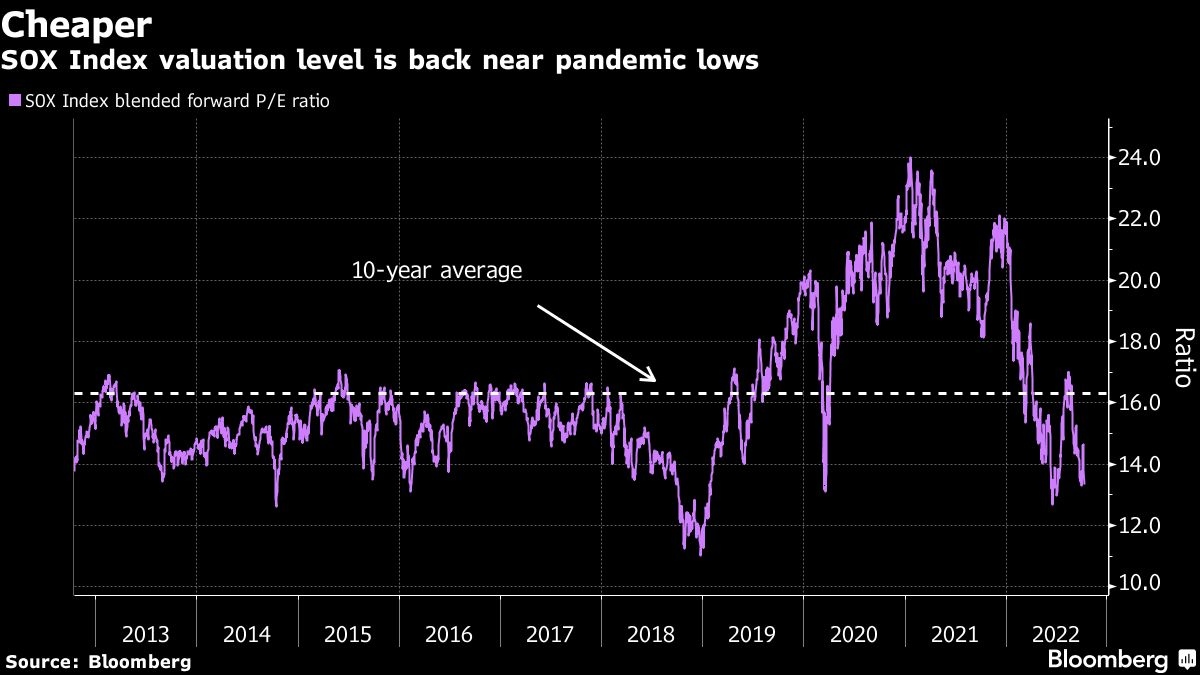 Beyond the cyclical downturn, U.S.-China tensions are adding to the industry’s woes. Washington unveiled sweeping curbs on the way chip companies do business with China’s tech industry -- restrictions that could weigh big on companies such as Nvidia and Taiwan Semiconductor Manufacturing Co.

While bad news is all stacked up against the sector, there’s probably one good sign: Typically the stocks bottom out well before an earnings trough, suggesting there’s only a bit more downside left before a 2023 turnaround.

A turn in the tide is seen starting in Asia first, with Morgan Stanley projecting a return to growth for the industry by the second half of 2023.

“We see Asia stocks emerging from the downturn more rapidly than the U.S. -- as most U.S. stocks have not even guided down yet, though stocks are down meaningfully,” wrote analysts led by Joseph Moore.

Not all investors are optimistic that the chip industry will have such a quick turnaround.

The inflection point probably won’t come until 2024 when inflation cools and appetite for chips recovers, according to Richard Windsor, founder of independent researcher Radio Free Mobile. Even for memory-chip makers that have seen a sharp drop in demand, he said its “impossible to tell” when the bottom will arrive and how sharp that will be.