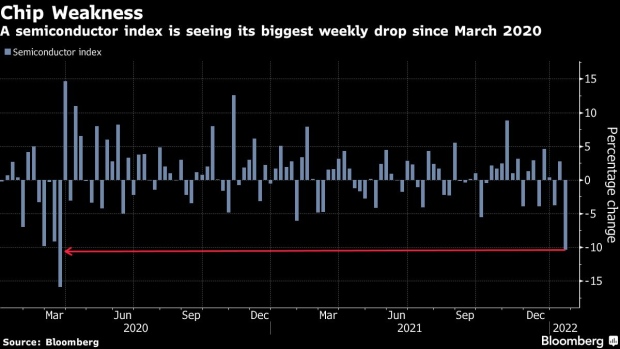 (Bloomberg) -- Shares of semiconductor companies fell on Thursday, with the group participating in a widespread late selloff for technology stocks that pushed the Nasdaq 100 Index into correction territory.

The Philadelphia Stock Exchange Semiconductor Index fell 3.3%, ending at its lowest since late October. The index has dropped more than 10% thus far this week, which would represent its biggest one-week percentage drop since March 2020. It is now down 13% off a December peak.

Technology stocks have come under heavy pressure at the start of 2022 amid a rise in U.S. Treasury bond yields and a rotation out of riskier assets. Among the notable decliners on Thursday, Nvidia Corp. fell 3.7%, Advanced Micro Devices Inc. lost 5%, Micron Technology Inc. shed 5.5%, and Broadcom Inc. dropped 2.9%.

Despite the weakness, analysts remain broadly positive on the sector. Earlier this week, BofA wrote that while rising rates could pose a valuation risk for the group, “this could be more than offset by strong inflows from investors seeking a sector with high-quality above-trend growth,” along with high profitability and with multiple cyclical and secular tailwinds.

Among other notable technology and internet names, Amazon.com shares fell 3% and closed at their lowest since March. Apple and Alphabet both fell more than 1%.