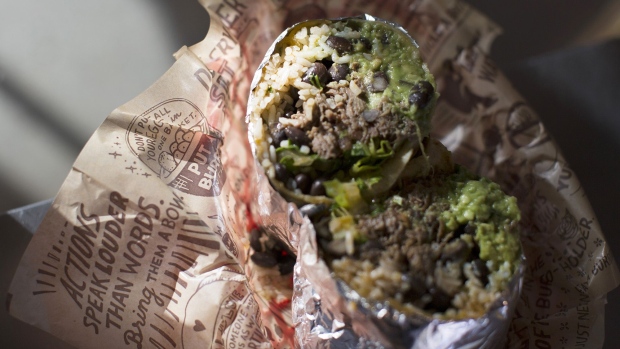 Chipotle Mexican Grill Inc. shares dropped after a surge in delivery orders cut into third-quarter profits, underscoring the challenges for restaurants trying to adapt to consumer behavior in the pandemic.

The delivery channel has let Chipotle fight off the impact of COVID-19 -- same-store sales grew 8.3 per cent from a year earlier, surpassing the estimate from Consensus Metrix. Digital sales, or those made online or via the company’s app, tripled in the period and accounted for almost half of all revenue, the company said in a statement.

But this also means that partners’ fees on those sales made them less profitable. That was in addition to an increase in other costs, such as general and administrative expenses, which climbed 16 per cent. Other operating costs -- which include the delivery fees -- soared nearly 50 per cent year on year.

Higher beef prices and lower sales of high-margin beverages, related to a drop in in-restaurant dining, also had an impact on results.

Even so, Chipotle’s prospects remain considerably brighter than the restaurant industry at large, which has been bludgeoned by consumers’ dramatic shift away from eating out. The stock has advanced 63 per cent in 2020 through Wednesday’s close, making it one of the top performers on the S&P 500 Index. That gain puts it well ahead of other big restaurant operators like McDonald’s Corp. and Starbucks Corp.

In a call with investors, Chief Executive Officer Brian Niccol said digital sales could exceed US$2.5 billion in 2020, -- more than double last year’s total -- if the current pace continues.

Drive-thrus have been a key part of fast-food chains’ success during COVID-19, so Chipotle’s move to start adding so-called “Chipotlanes” prior to the pandemic is paying off. The burrito chain added 26 drive-thrus during the third quarter and has plans for more.

Because of the costs associated with third-party delivery, company executives said they are testing out some price increases for those orders.

Sales were boosted by takeout and delivery, which remained strong throughout the third quarter. Carne asada burritos, which were recently brought back to the menu, were also a draw, the company said.

The company opened 44 new restaurants and closed three during the quarter. About 10 remain closed temporarily because of COVID-19, mainly inside malls and shopping centers.