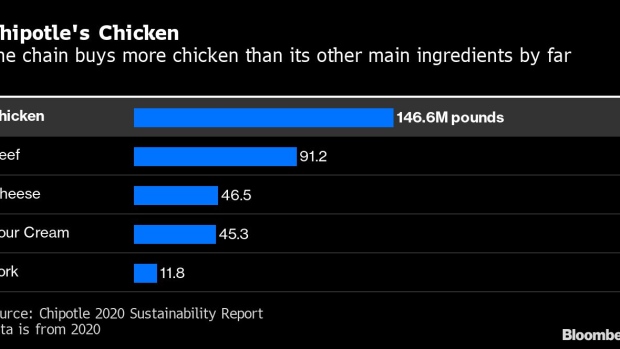 A worker prepares a burrito at a Chipotle restaurant in Naperville, Illinois, U.S., on Wednesday, March 2, 2022. Jack Hartung, chief financial officer of Chipotle Mexican Grill, said inflation is hitting every aspect of the restaurant's costs, but he believes customers have so far accepted the company's decision to raise menu prices by roughly 10% in 2021. , Bloomberg

(Bloomberg) -- Chipotle Mexican Grill Inc. says its goal to source and sell chicken that’s certified as humanely raised has been delayed because its suppliers weren’t able to make the necessary changes without disrupting supply.

The burrito seller, which has long touted its “Food With Integrity” push for antibiotic-free meat and local ingredients, had planned to sell all third-party certified humane chicken by the end of 2021. But Chipotle says it was unable to take this step last year amid high demand and its stringent requirements for poultry. The company will meet the goal by the end of this year instead, spokeswoman Laurie Schalow said in a statement.

“Unfortunately we did not meet our goal that 100% of our chicken would be third-party humane certified by the end of 2021,” she said. “Since the transition requires changes to our existing suppliers in order to achieve 100% third party certification, we were unable to take this step in 2021 without interrupting the business.”

Chipotle isn’t currently experiencing any chicken shortages. The company is planning to share the update on its humane-chicken target and progress toward other goals in its sustainability report later this month.

Restaurants are under growing pressure to show that the food they serve comes from sustainable sources, with animal welfare an important part of that equation. McDonald’s Corp. is facing off against billionaire investor Carl Icahn over the treatment of pigs in its supply chain, while Wendy’s Co. may be required to disclose more information about the same topic if a shareholder proposal from the Humane Society of the United States is approved.

Chipotle, which bought nearly 147 million pounds of chicken in 2020, says its priority last year was to make sure it had sufficient supply for its restaurants. Now, the company has enlisted two new suppliers to help meet its goal.

In 2020, about 84% of the boneless, skinless thighs and whole legs it bought were certified humane. Last year, about 40% of the 189 million pounds it purchased were certified humane as its new suppliers start working with American Humane Certified -- the third party that Chipotle uses to inspect its vendors.

Chicken is a big deal for Chipotle -- the chain has been purchasing more of it, especially after March’s introduction of the pollo asado menu item across the U.S. and Canada. Chipotle’s 2,900 locations sell more chicken “by far” than other proteins, according to Chief Marketing Officer Chris Brandt.

In an interview last year, Brandt said Chipotle’s chicken is already harder to source because the company buys antibiotic-free birds that are fed a vegetarian diet -- a step above commodity chicken.

Even before Covid, demand for chicken -- seen as a healthy and relatively cheap protein -- had been climbing, fueled in part by a new sandwich at Popeyes. More have hopped on the trend, with chains from Panera Bread to Burger King offering new chicken options.

“When Popeyes launched that chicken sandwich, it really did seem to increase the popularity,” Brandt said. “People feel better about eating chicken. The pandemic seems to have really pushed chicken in the same way it pushed pizza.”

The chain’s purchase of only dark meat, which is seen as more flavorful than white meat, has been a stumbling block in its quest for humane chicken, according to a person who was involved in past conversations with the chain’s poultry suppliers who asked not to be identified.

In those discussions, what to do with the rest of the bird -- the breast meat -- was a problem since that certified humane product was priced at a premium that other fast-food buyers weren’t willing to pay, the person said.

Increasing demand for chicken is causing supply headaches for restaurant owners across the country. Over the course of the pandemic, some cuts have been hard to get and big companies are locking in inventory in advance.

In 2017, Chipotle said it would shift to strains of smaller birds bred to grow more slowly, as laid out in the Better Chicken Commitment from the non-profit Global Animal Partnership. The chain is still working toward that goal with a 2024 deadline, along with other major food companies such as Starbucks Corp., Popeyes and Nestle SA. That target has some overlap with the humane-certified goal, which enlists a third-party auditor to check welfare conditions of animals and approve the meat that Chipotle purchases.

Chipotle says it’s continuing to work with poultry farmers to improve the welfare of birds by adding natural light in barns, and giving chickens more space to move around.

Josh Balk, vice president of farm-animal protection at the Humane Society, says Chipotle is recognized for its policies on animal welfare and the company has been transparent about its promises.

“I’d rather have a company be honest about not reaching a commitment and have a new timeline,” Balk said in an interview. “With Chipotle, they have been a leader since their founding.”