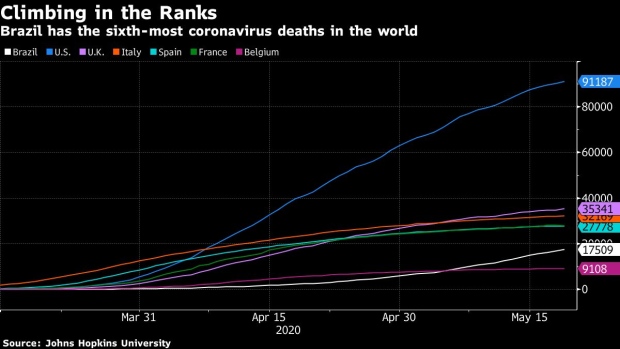 (Bloomberg) -- With coronavirus cases setting record after record in Brazil, an 86-year-old anti-malarial drug with an unproven track record against Covid-19 is taking center stage in the country’s political debate and public life.

President Jair Bolsonaro is poised to loosen protocols later this week for the use of chloroquine for mild coronavirus cases despite dangerous side effects, experts’ warnings and no demonstrated success in clinical trials.

Undeterred, the president has ordered the military to ramp up production of the drug as he makes it a key element in the anti-virus fight, losing two health ministers in the process due in part to their objections to his strategy.

The controversy is just the latest twist in Brazil’s erratic strategy to tackle the virus, with Bolsonaro pushing to restart the economy while local authorities try to enforce lockdowns and restrict activities to control it. In the past few days, Brazil has overtaken Spain, Italy and the U.K. and now trails only Russia and the U.S. in confirmed Covid-19 infections, with more than a quarter million people testing positive and almost 18,000 deaths.

On Tuesday, Brazil reported 17,408 new confirmed cases and 1,179 deaths registered over the past 24 hours -- both records.

Since the start of the pandemic, Bolsonaro has often touted the anti-malarial medication. In small, yet frequent weekend demonstrations against social distancing, his supporters often carry signs asking for it to be authorized for use in the public health system. Even U.S. President Donald Trump has backed the practice, saying on Monday that he’s been taking hydroxychloroquine, a sister drug, as a precautionary measure.

With the new guidelines, Brazil will allow for expanded use of chloroquine to include less serious cases and for patients in the early stages of infection.

Bolsonaro rarely misses a chance to talk up the drug to the press and on his social media accounts, helping fuel a fierce debate within the ranks of Brazil’s medical profession. Several doctors who contracted the virus in Brazil have been encouraged to talk about their recovery, disclose if they took the drug and would they recommend it. Ligia Kogos, a celebrity dermatologist, said in an interview last month that she has prescribed it to her entire staff.

Clinical trials have failed to prove chloroquine’s efficacy in combating Covid-19. French research found the drug didn’t reduce the likelihood that a Covid-19 patient would die. Other trials were halted when patients developed potentially fatal irregular heart rates. Brazil has several ongoing trials involving hydroxychloroquine and chloroquine, including one that was partially suspended after patients taking a higher dosage showed “a trend toward higher lethality.”

The World Health Organization “cautions against physicians and medical associations recommending or administering these unproven treatments to patients with COVED-19 or people self-medicating with them,” according to the organization’s website.

With demand for chloroquine going up, a Brazilian health insurance firm created a drive-through to distribute it to clients who can provide a prescription -- with no need to have tested positive for the disease. Unimed Belem is giving out a kit containing the drug, plus the antibiotics azithromycin and ivermectin, in the Amazonian state of Para. The state, one of Brazil’s poorest, has implemented lockdowns to counter the spread of the pandemic.

Prevent Senior, another health insurance plan focused on the elderly, has been providing chloroquine to patients presenting symptoms consistent with a mild stage of the virus.

“Of all the patients who started the medication on the second day, only a very small percentage had to be hospitalized and intubated,” said Fernando Parrillo, CEO of Prevent, during a debate organized for a private bank last week.

Last month, Bolsonaro ordered military labs to expand production of chloroquine, which is usually given out to troops operating in the Amazon and other malaria-ridden locations. The military produces about 125,000 pills a year, according to its press office, but for April alone, the numbers topped 1.2 million.