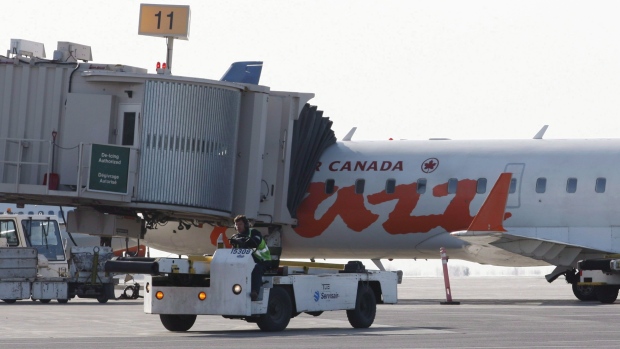 Profits dropped by 25 per cent and revenue tumbled 45 per cent at the regional aviation company, which suffered from plummeting demand amid travel restrictions.

“Our Air Canada Express operation is a fragment of what it was this time last year.”

The number of passengers on Air Canada Express, whose flights Chorus operates, dropped to 92,000 in the second quarter, a 97 per cent decline from 2.7 million travellers in the same period a year earlier. The number of flights fell to 5,000 from more than 56,000.

Despite the industry's “fragile” state, Randell sees blips of hope on the radar.

“Regional aviation is generally resuming flying earlier and at a quicker pace than long-haul travel,” he noted.

Chorus cut costs, curtailed capital investment and laid off 3,200 of its roughly 5,000 employees in response to the pandemic. Most of them were let go well before Air Canada announced in June it would discontinue 30 regional routes - 21 of them operated by Jazz Aviation, a Chorus subsidiary - and close eight Jazz-managed airport stations.

In the second quarter, Air Canada Express flew roughly nine per cent of the hours it logged a year earlier. While the return of regional routes will be “protracted and sporadic,” Randell expects flight time to rise to between 20 and 30 per cent of last year's hours for the balance of 2020.

Meanwhile about half of Chorus's leased fleet - the company's other line of business - is now back in the air, with the number of flight hours up from the nadir of last spring.

The Halifax-based company collected only 28 per cent of lease revenue in the second quarter due to rent deferrals, though the figure climbed to 38 per cent in July, Chorus said.

Randell, like Air Canada's CEO, cast a harsh glance at government for imposing tough restrictions on a battered industry.

“Canada's federal and interprovincial travel restrictions are now one of the most severe in the world. The mandatory two-week quarantine requirement in Nova Scotia, as an example, makes doing business very difficult,” he said.

Randell called on officials to look to other G20 countries that have implemented “practical and science-based approaches” to loosening restrictions and supporting airlines.

Carriers have prodded Ottawa and provincial governments to ease the blanket ban on foreign travellers, the Canada-U.S. border shutdown and the two-week quarantine required of anyone entering the country, as well as the travel “bubble” in Atlantic Canada that requires two weeks of self-isolation for those arriving from outside the region.

Chorus shares gained 12.3 per cent or 31 cents at $2.82 in late morning trading on the Toronto Stock Exchange.