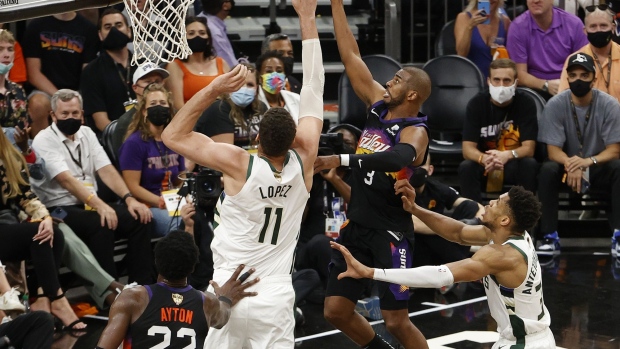 Chris Paul of the Phoenix Suns goes up for a shot during Game Five of the NBA Finals on July 17. , Photographer: Christian Petersen/Getty Images North America

(Bloomberg) -- Basketball stars Chris Paul and Kevin Love are part of a group of athletes putting money behind a sports-card marketplace as collectibles gain momentum with investors.

Dibbs, a real-time trading platform that allows users to invest in fractions of physical sports cards through nonfungible tokens, or NFTs, is raising $13 million in funding in a round set to be announced Tuesday. The investment was led by venture firm Foundry Group and joined by Tusk Ventures, Courtside Ventures and Founder Collective.

Sports memorabilia has become a popular asset class, with items going at record prices over the past year. In January, a collector bought a Mickey Mantle card for $5.2 million at auction -- the most ever paid for a baseball card. New York-based card company Topps Co. is going public through a deal with a special purpose acquisition company, and Italy’s Panini SpA is attracting interest as well.

The round brings total funding for Dibbs to $15.8 million since it was founded in 2020. Management will spend funds on engineering, product-development staff and marketing as it looks to expand after ending an invite-only beta test this month. It’s now available in the U.S. and has accumulated more than 17,000 users.

Dibbs takes cards and puts them into vaults to be housed while users trade fractions of the items, lowering entry barriers for those who want to own a piece of a high-value collectible. Cards can come on or off the platform as traders add them on consignment or buy out ownership entirely. Dibbs makes revenue off the trading fees.

“Physical collectibles have hundreds of years of proven value and interest and genuine collectability,” Evan Vandenberg, co-founder and chief executive officer of Dibbs, said in an interview. He hopes to add other memorabilia beyond cards, including less traditional goods like game tickets.

Executives plan to work with their new high-profile investors on marketing and creative direction. Other sports figures participating in the funding round with Dibbs are the NFL’s DeAndre Hopkins, MLB’s Kris Bryant and basketball’s Skylar Diggins-Smith and Channing Frye.

Paul, 35, has invested in businesses such as mobile banking app Goalsetter, indoor farming startup Bowery and therapy device maker Hyperice. He’s also an investor in Beyond Meat Inc., where he has taken an active role as a celebrity endorser for the plant-based food company.

“As new digital platforms are created, what it means to be a fan evolves and it creates new meaningful ways to connect with fans,” Paul said in a statement. “Dibbs levels the playing field for fans for whom the current collectibles market is inaccessible.”