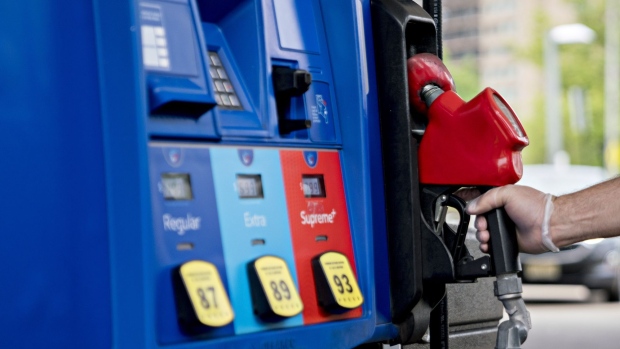 A customer wearing a protective glove returns a fuel nozzle after refueling at an Exxon Mobil Corp. gas station in Arlington, Virginia, U.S., on Wednesday, April 29, 2020. Exxon is scheduled to released earnings figures on May 1. Photographer: Andrew Harrer/Bloomberg , Bloomberg

The Church of England Pensions Board has sold all its holdings of Exxon Mobil Corp. because the oil giant failed to set goals to reduce emissions produced by its customers.

The divestment was completed this week. The proceeds went to an index that aligns with the objectives of the Paris climate agreement, said a spokesperson for the board. Exxon isn’t included in the FTSE TPI Climate Transition Index because it hasn’t set targets for Scope 3 emissions that are generated when customers burn fossil fuels.

“Exxon failed to meet the index criteria which embeds the latest assessment by the Transition Pathway Initiative (TPI), and as a result the board is disinvested from Exxon,” said a spokesperson for the Church of England Pensions Board, which manages funds in excess of 2.8 billion pounds (US$3.6 billion) for retired clergy and others who have worked or served for the church.

The decision to exit Exxon was made before Bloomberg News reported Monday, citing an analysis of internal documents, that the Irving, Texas-based company had plans to increase annual carbon-dioxide emissions by as much as the output of the entire nation of Greece. Exxon officials responded to the story by saying the company’s projections were “a preliminary internal assessment” and “have significantly changed” since the documents were circulated earlier this year. Exxon has so far declined to provide any details about the new figures.

Companies with more than 40 per cent of total emissions generated by customers or suppliers need to set a goal to reduce these Scope 3 emissions, if their climate plan is to align with United Nations goals. Exxon doesn’t discloses its Scope 3 emissions and, thus, doesn’t set targets to reduce them. In its annual sustainability report, Exxon declares that emissions created by customers “are not within [Exxon’s] direct control” and “the result of choices consumers make.”

The commissioners were among a group of investors earlier this year that unsuccessfully pushed Exxon to separate the roles of chairman and chief executive officer because of a lack of ambition on climate change and also failed to get a majority vote for details on Exxon’s lobbying disclosures.

The Church of England Pensions Board has worked with FTSE Russell and the TPI at the London School of Economics Grantham Research Institute to develop the FTSE TPI Climate Transition Index. The index, introduced in January, uses forward-looking climate data from TPI to identify companies that are aligned with United Nations climate goals and it significantly underweights or excludes those companies that don’t. The board has invested 600 million pounds in the index this year.