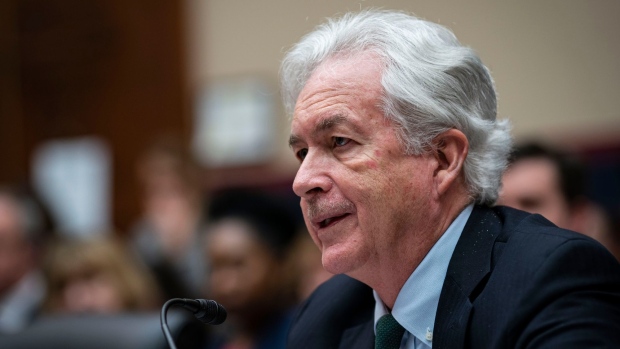 William Burns, director of the Central Intelligence Agency (CIA), speaks during a House Intelligence Committee hearing in Washington, D.C., U.S., on Tuesday, March 8, 2022. Russia is likely to face "a persistent and significant insurgency" after President Vladimir Putin misjudged how the war against Ukraine would proceed but the Russian leader won't be deterred and may try to change how he defines victory, the top U.S. spy chief said. Photographer: Al Drago/Bloomberg , Bloomberg

(Bloomberg) -- CIA Director William Burns met in Turkey on Monday with his Russian counterpart to warn against the use of nuclear weapons, a White House spokesperson said, amid concern that Moscow may set off a “dirty bomb” that would spread radioactive material and blame it on Ukrainian forces.

The meeting in Ankara with Russian foreign-intelligence chief Sergei Naryshkin wasn’t a negotiation over the war in Ukraine, and Burns didn’t plan to discuss a settlement, the spokesperson said on customary condition of anonymity. Burns also planned to raise the cases of American citizens unjustly detained by Russia, the spokesperson said, a reference to WNBA star Brittney Griner and former US Marine Paul Whelan.

US officials briefed the Ukrainian government before the trip, the spokesperson said.

Earlier Monday, President Joe Biden discussed the war in Ukraine with Chinese President Xi Jinping during a meeting at the Group of 20 summit in Bali, Indonesia. The two leaders agreed that “a nuclear war should never be fought and can never be won and underscored their opposition to the use or threat of use of nuclear weapons in Ukraine,” according to a US summary.

Biden has said repeatedly that the US won’t decide when and how to begin negotiations to bring an end to the conflict in Ukraine.

“I’ve been very clear that we’re going to continue to provide the capability for the Ukrainian people defend themselves. And we are not going to engage in any negotiation. There’s nothing about Ukraine without Ukraine,” Biden told a news conference.

Nonetheless, Burns is especially well-placed to engage Russian officials on the war and its impact. Beyond his current role as head of the Central Intelligence Agency, Burns is a former diplomat who served as ambassador to Russia from 2005 to 2008. At a congressional hearing in July, he joked that “most of the gray hair on top of my head came from negotiating with Russians and Iranians over the years.”

Burns visited Moscow last November in an unsuccessful effort to head off the invasion of Ukraine that came in February. He has called the war a “strategic failure” for Russia.

Although Russian President Vladimir Putin fueled fears with warnings that Russia would use all means available to defend the parts of Ukraine it illegally annexed, Russian diplomats have tried to dial back that threat in recent months.

While Russia’s nuclear strategy allows it to “hypothetically resort to nuclear weapons,” an attack would be launched only in response to first use by another country or if the “very existence of the state is in jeopardy,” according to a document that Russian diplomats provided to the International Atomic Energy Agency this month.

--With assistance from Jonathan Tirone.