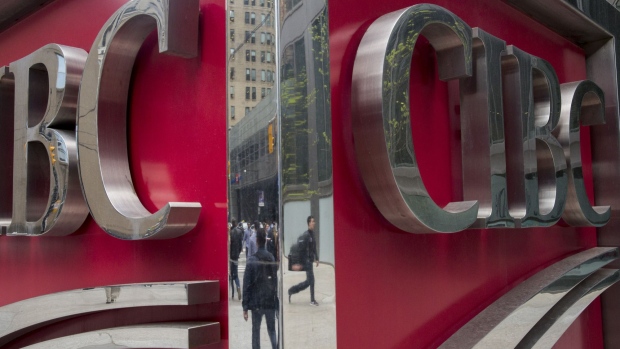 Pedestrians are reflected in signage on the exterior of the Canadian Imperial Bank of Commerce (CIBC) headquarters building in Toronto, Ontario, Canada, on Friday, May 19, 2017. Ontario is easing rules for its pension funds as years of low interest rates, poor equity returns and a looming retiree glut pressure companies. , Bloomberg

Canadian Imperial Bank of Commerce cut about 15 senior staff in its capital markets division this week, according to a person with knowledge of the move.

The employees were CIBC Capital Markets managing directors and the reductions were across all areas of the operation, said the person, who asked not to be identified discussing personnel decisions. CIBC had 1,408 capital markets employees as of the end of July, according to financial disclosures.

“We regularly review our businesses to ensure we are well-positioned to meet the evolving needs of our clients, and we make adjustments where needed to support our continued growth,” CIBC spokeswoman Jessica Steinberg said in an emailed statement.

Banks in the U.S., Europe and elsewhere have been culling capital markets jobs amid a lackluster year in dealmaking and an industrywide decline in revenue that their Canadian counterparts haven’t been able to escape. Royal Bank of Canada, which has the biggest investment banking operations among the country’s lenders, earlier this month began cutting as many as 40 capital markets jobs in London.

That followed reductions at Australia’s Macquarie Group Ltd., with about 100 equity research and sales jobs set for elimination in London and New York, and Citigroup Inc., which began cutting about 400 trading employees in July, joining Deustche Bank AG and Societe Generale SA in scaling back.