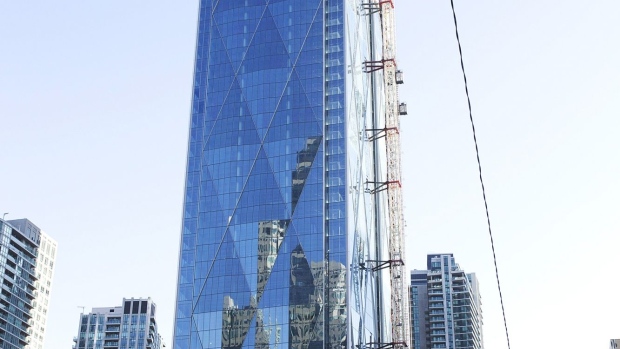 CIBC Square stands under construction in the financial district of Toronto, Ontario, Canada, on Friday, Feb. 21, 2020. Canadian stocks declined with global markets, as authorities struggled to keep the coronavirus from spreading more widely outside China. However, investors flocking to safe havens such as gold offset the sell-off in Canada's stock market. , Bloomberg

(Bloomberg) -- Canadian Imperial Bank of Commerce led a syndicate of lenders providing a C$780 million ($642 million) green loan that will finance the second phase of construction of the CIBC Square office complex in Toronto.

The transaction is the largest-ever green real estate construction loan in Canada, according to a joint statement from CIBC, which served as administrative agent and green structuring agent, and developers Ivanhoe Cambridge and Hines. Desjardins Capital Markets and HSBC Bank Canada served as co-lead arrangers.

CIBC Square is set to be first office complex in Toronto to reduce water consumption by capturing, filtering, and sanitizing groundwater for use in on-site washrooms, according to the statement. National Bank of Canada, Toronto-Dominion Bank, Bank of Nova Scotia, Bank of Montreal, and Wells Fargo also took part in the five-year deal, which is aligned with the Green Loan Principles, market guidelines developed to promote the development of the green loan market.

(Adds duration of the loan in third paragraph)