Canadian Imperial Bank of Commerce reported fiscal second-quarter profit Thursday that beat estimates by a wide margin on the back of a dramatically improved credit landscape.

CIBC's net income for the three-month period that ended April 30 totalled almost $1.7 billion, compared to $392 million a year earlier. On an adjusted basis, CIBC earned $3.59 per share; analysts, on average, were expecting $3.00 in per-share profit.

Similar to the Bank of Montreal’s last quarterly report which set the bar for its peers on Wednesday, CIBC's quarter was marked by a significant drop in money being set aside for loans that could go bad. It booked $32 million in total provisions for potential credit losses, down 98 per cent from $1.4 billion a year earlier when banks feared a surge in defaults as a result of COVID-19. The improvement was also evident sequentially, as CIBC had set aside $147 million in its fiscal first quarter. 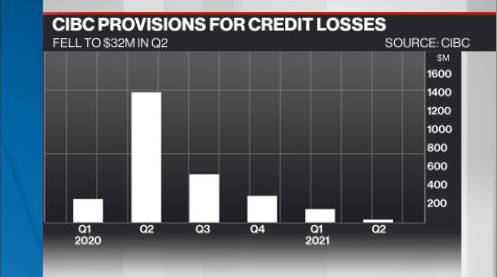 CIBC's core Canadian personal and business banking division saw profit surge 270 per cent year-over-year to $603 million despite revenue that was virtually unchanged at $1.9 billion. Often viewed as the bank that's most dependent on the domestic housing market, CIBC's residential mortgage book in Canada climbed to $230 billion in the fiscal second quarter, compared to $208 billion a year earlier. 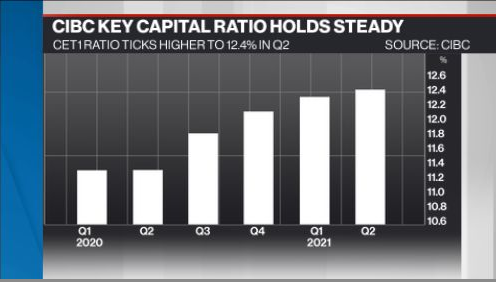 “We are delivering results by building on the momentum we have established in our Canadian consumer franchise, further accelerating our performance in areas where we have strength, and simplifying and transforming our bank to enable reinvestment for growth,” said CIBC Chief Executive Officer Victor Dodig in a release.

The bank's other major divisions joined the domestic unit in posting significant year-over-year profit growth. None more so than CIBC's American unit, where net income rose 1,340 per cent to $216 million as revenue climbed and the lender reversed $12 million that had been set aside for potential credit losses.