Five years into Victor Dodig’s time as chief executive officer of CIBC, the performance gap between Canada’s fifth-largest bank and its peers is as wide as ever.

“They seem to be a day late and a dollar short,” said Barry Schwartz, chief investment officer of Baskin Wealth Management, who has avoided investing in CIBC. “They seem to be swinging past the fastballs and missing the easy layups that the other banks get right.”

Dodig has tried recasting a bank that once had a reputation for walking into sharp objects into a modern, dynamic lender focused on accelerating earnings growth by simplifying its structure, improving relationships with clients and making acquisitions. But shifting strategies and inconsistencies have frustrated investors, including a mortgage misstep that saw CIBC go from leader to laggard in two years.

CIBC is the only major Canadian bank to see its mortgage book shrink this year -- something that’s particularly problematic given that home loans are its biggest consumer product.

“Candidly, I think we went too far left in slowing things down, put the brakes on too hard,” Dodig, 54, told investors at a banking conference in September. “We’re readjusting for that.”

The bank lags behind peers on many financial measures this year: CIBC is the only Canadian bank to see profit shrink so far this year, with a 2.2 per cent decline. Revenue growth is less than half that of its bigger rivals. Profit at its biggest and most important division, Canadian personal and small-business banking, is down 10 per cent. Return on equity, a profitability measure, has been falling since 2016, partly due to the 2017 acquisition of PrivateBancorp.

Dodig will be under pressure to show improvement when the Toronto-based lender reports its fiscal fourth-quarter results, scheduled for Dec. 5.

CIBC shares have underperformed the 22 per cent return of the eight-company S&P/TSX Commercial Banks Index since Dodig became CEO in September 2014, with its eight per cent gain trailing all of Canada’s Big Six lenders except Bank of Nova Scotia. The stock fell 0.5 per cent to $114.80 at 9:48 a.m. in Toronto. 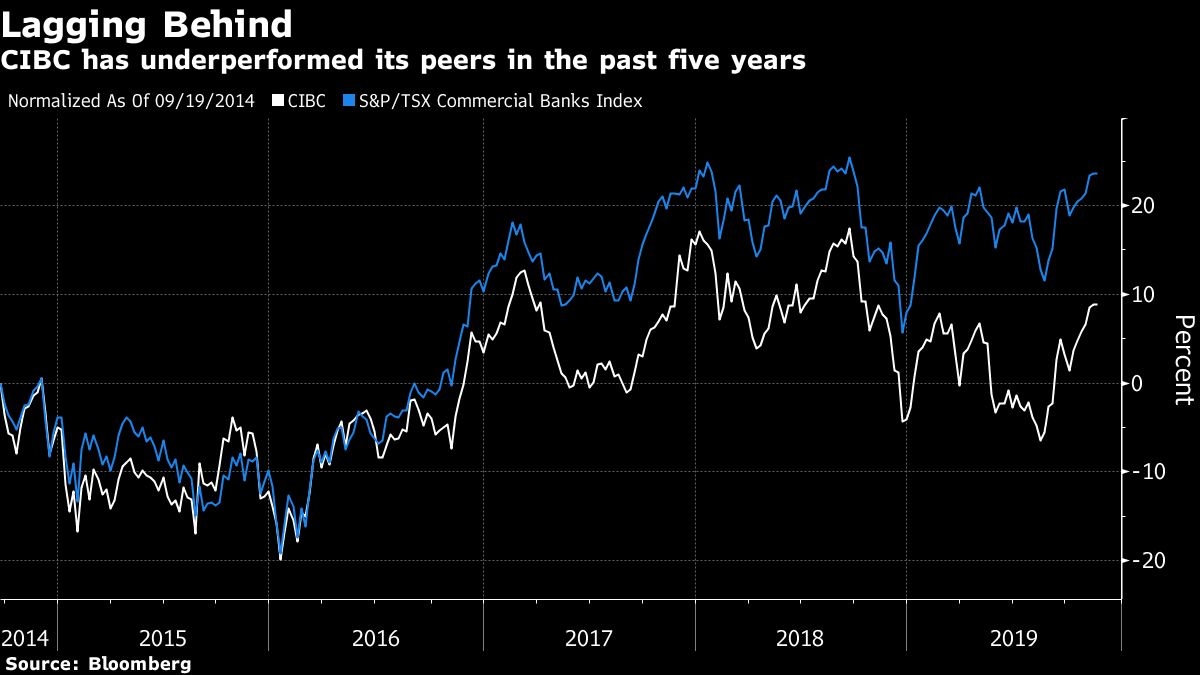 The bank’s shares trade at a discount despite CIBC’s “de-risking” efforts because of management’s inability to communicate its changing strategies to investors, according to Barclays Plc bank analyst John Aiken.

“People are scratching their heads, trying to figure out exactly where things are heading,” Aiken said in an interview. “Concern has shifted away from risk into strategy, growth and outlook -- and CIBC is still viewed as the bank with more issues from an investment standpoint.” 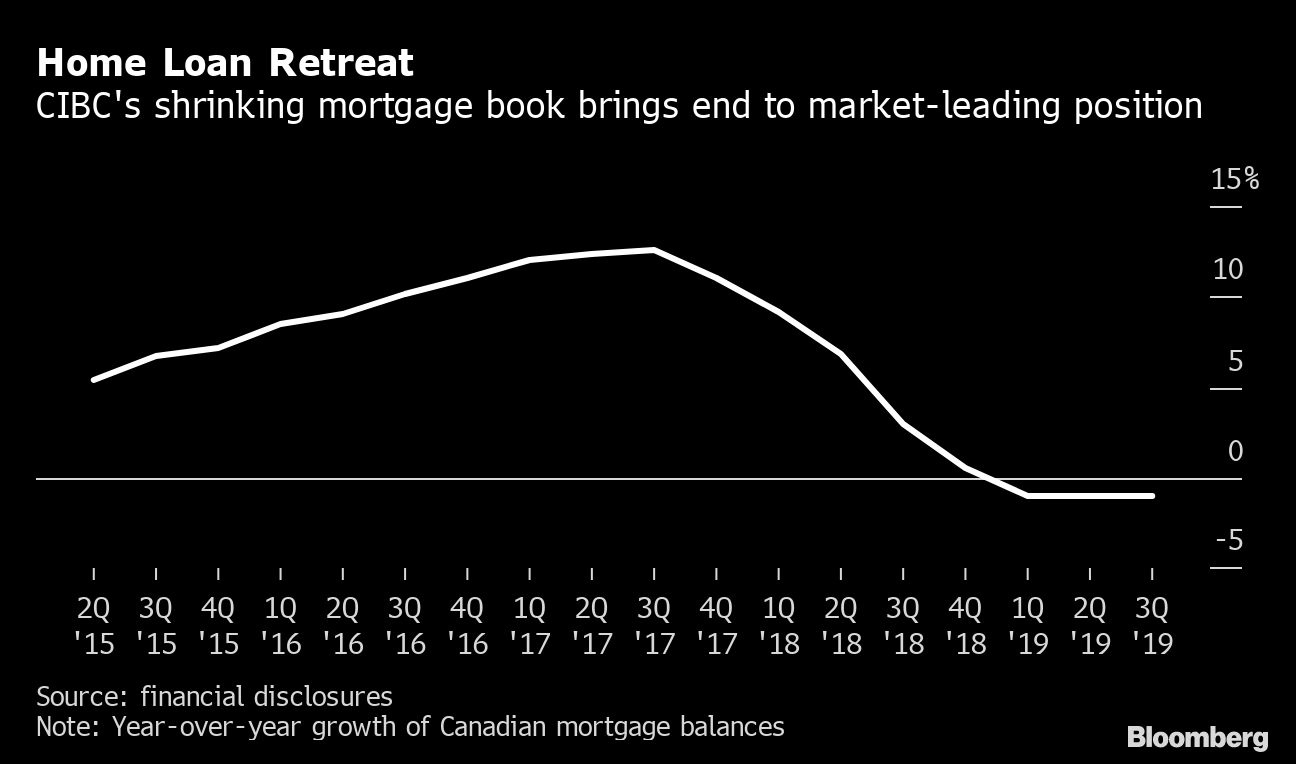 In his early days, Dodig looked to be on the right track. He achieved his initial goals of accelerating earnings growth to five per cent to 10 per cent between 2016 and 2018, and surpassed a $4.9 billion annual profit target by the end of that period. But 2019 has been challenging and CIBC’s drive to continue increasing earnings is under threat, with Dodig warning investors in May to expect “relatively flat” growth this fiscal year.

“There’s no question we haven’t achieved the same level of performance in the first three quarters of 2019,” Dodig said in an email. “While it’s tempting to change course when things get tough, we must take a long-term view of our strategy and focus on creating long-term value.”

CIBC’s mixed messages on mortgages and acquisitions are examples of issues that have confused investors, said Steve Belisle, a senior portfolio manager with Manulife Investment Management.

The $5 billion takeover of Chicago-based PrivateBancorp in June 2017 -- CIBC’s largest acquisition in its 152-year history, and a move designed to counter investor concerns that the bank is too Canadian -- was criticized by those expecting a smaller deal.

When Dodig took over in 2014, he earmarked as much as $2 billion for U.S. wealth-management deals. Within two years, that swelled to a $4 billion budget for deals that could include private banking or a commercial lender. PrivateBancorp exceeded that, though CIBC was hurt by bad timing: Donald Trump’s 2016 election victory drove bank stock prices up, forcing CIBC to increase its initial $3.8 billion offer to win over PrivateBancorp investors.

“We needed capabilities on both sides of the border to grow key client relationships, and we’re pleased the acquisition became accretive well ahead of schedule,” Dodig said in an emailed statement. “I would do this deal again any day.”

CIBC’s U.S. push comes years after bigger rivals Royal Bank of Canada, Toronto-Dominion Bank and Bank of Montreal made substantial forays south of the border and reaped rewards from the American exposure, giving them rising profits and diversification beyond their home turf.

Dodig has made other changes to recast CIBC. He pursued small deals to build up its U.S. capital-markets operation and sold some businesses. This month, CIBC agreed to pare ownership in CIBC FirstCaribbean by selling a 67 per cent stake, though at a reduced value from its earlier investment. He’s moving the bank to new headquarters after a century at Toronto’s financial district, leasing as much as 1.75 million square feet at a nearby complex under construction called CIBC Square.

“We recognize there have been cases where we could have more clearly communicated with investors and we’ll take that feedback and act on it –- because we have the right strategy and we need to ensure it is consistently articulated and well understood,” Dodig said.

“Everybody has noticed the underperformance and CIBC now has a smaller valuation than National Bank, and that doesn’t make a lot of sense,” Baskin’s Schwartz said, adding that he’s thinking about buying shares. “This could be the one to break out. It’s definitely on our radar screen.”