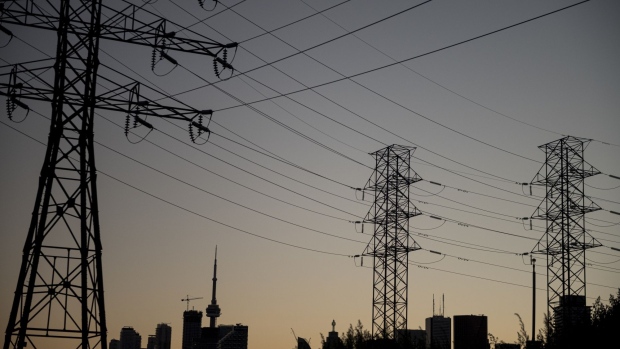 Hydro towers at dusk in Toronto, Ontario, Canada, on Thursday, Aug. 11, 2022. A power failure in downtown Toronto has knocked out electricity in parts of the citys financial district, affecting about 10,000 customers. , Bloomberg

(Bloomberg) -- Canadian Imperial Bank of Commerce set a goal of reducing the carbon-emissions intensity of its lending to power generators, adding to targets it has already placed on the oil and gas industry.

The target entails a 32% reduction in the intensity of scope 1 emissions -- those generated by the companies themselves -- from CIBC’s loan portfolio by 2030 from decade-earlier levels, the Toronto-based bank said in a statement Thursday. Intensity refers to the amount of carbon emitted per unit of electricity generated.

“We’re committed to working together with stakeholders to play our part in enabling a more sustainable future, and establishing clear interim targets is an important element in achieving these long-term ambitions,” Kikelomo Lawal, executive vice president and chief legal officer at the Toronto-based lender, said in the statement.

Most of Canada’s large banks have set interim reduction targets for certain high-emitting industries this year as part of their commitments to zero out the emissions associated with their lending activities by 2050. Only Bank of Montreal has pledged to reduce absolute emissions from part of its loan book by 2030.

Strong interim targets for absolute emissions are important because global carbon-dioxide emissions need to fall by about 45% from 2010 levels by 2030 to limit global warming to 1.5 degrees Celsius (2.7 degrees Fahrenheit), according to the Intergovernmental Panel on Climate Change.

In March, CIBC set 2030 goals for its oil-and-gas portfolio of a 35% reduction in scope 1 and 2 emissions intensity and a 27% reduction in the intensity of scope 3 emissions, which are those generated by burning the fuels the companies sell.