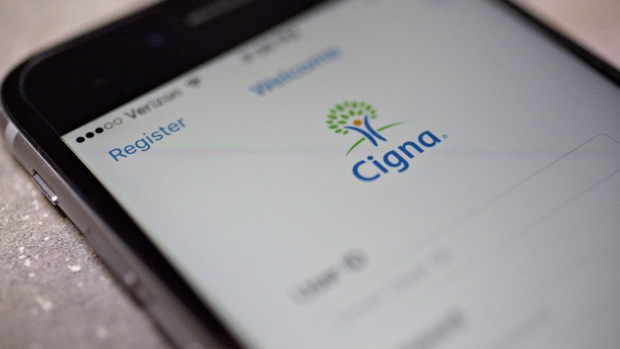 The Cigna Corp. myCigna application is displayed on an Apple Inc. iPhone in Washington, D.C., U.S., on Thursday, April 26, 2018. Cigna Corp. is scheduled to release earnings figures on May 3. Photographer: Andrew Harrer/Bloomberg , Bloomberg

(Bloomberg) -- Cigna Corp. unveiled a new brand division that will house its health-services businesses including drug-plan manager Express Scripts, in the latest sign that companies traditionally known for selling insurance see their future in competing in broader health-care markets.

Called Evernorth, the unit will encompass Express Scripts, which Cigna bought in 2018 for $66 billion, and other businesses the company markets to employers, health plans and governments. Tim Wentworth, who leads Express Scripts and other services businesses, will be Evernorth’s chief executive officer.

In an interview, Wentworth called the new alignment a “declaration to the market that we intend to serve the health plans and employers in our country, not just Cigna.”

Cigna and its competitors have expanded their offerings in recent years beyond the core health-insurance business that long defined them. Insurers are now part of companies that also own pharmacy-benefit managers, specialty pharmacies, and in some cases medical practices, drug stores and technology businesses.

UnitedHealth Group Inc. may be furthest along in diversifying from insurance. The company’s Optum division, which includes a PBM, surgery centers and clinics, now accounts for about half of the company’s earnings. Anthem Inc. recently launched its own PBM after ending a previous contract with Express Scripts. Aetna has been absorbed into CVS Health Corp., the drugstore chain and PBM.

The moves could counter competitive threats from outsiders like Amazon and Walmart that have been eyeing the $4 trillion U.S. health-care industry. The health-insurance business has evolved as well, with most large employers now funding medical claims themselves and hiring insurers to administer the plans rather than manage risk. Privately managed versions of the government’s Medicare and Medicaid programs account for a growing share of health insurers’ business.

The Evernorth business will include what Cigna now calls its health-services segment, which encompasses Express Scripts, Wentworth said. The company’s Accredo specialty pharmacy and eviCore care-management units will also be under the new brand.

Since combining with Express Scripts, Cigna’s health-services arm processes more than a billion prescriptions a year. The business provides a majority of the company’s revenue but profit margins are lower than in its health-plan segment, which it calls “integrated medical.”

Cigna has told investors to expect long-term adjusted earnings-per-share growth of 10% to 13%. Wentworth said Evernorth will be an important driver of growth.

Some existing products will fall under the brand, including a program called Embarc Benefit Protection intended to cover high-cost gene therapies and a mental-health product called InMynd. It will also include relatively new products: Cigna’s offering to assist employers bringing people back to workplaces during Covid-19, called Healthy Ways to Work, and a fertility service called FamilyPath.

Wentworth suggested more are in the works. “What folks should expect is a drumbeat of innovation out from this brand,” he said.

That may include further acquisitions or investments, particularly around technology and virtual care, Wentworth said. “We are very interested in working with others, whether that’s through M&A or other ways to create value and partner,” he said. He said the company was more interested in technology and services businesses than purchasing medical providers outright.

Cigna’s shares were down 19% for the year to date through Tuesday’s close, compared with a 0.9% increase in the S&P Managed Health Care Index.