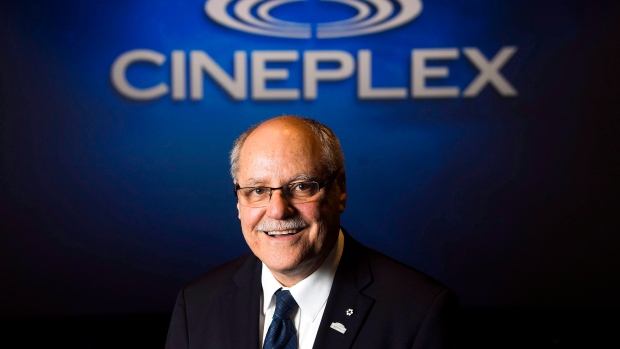 Ellis Jacob, President and Chief Executive Officer of Cineplex Entertainment, poses for a photograph after the company's annual general meeting in Toronto on Wednesday, May 17, 2017. , THE CANADIAN PRESS/Nathan Denette

TORONTO - Cineplex Inc. CEO Ellis Jacob says the country's largest movie theatre chain is prepared to be “agile and nimble” as it faces historic business challenges and unpredictable COVID-19 restrictions in the pandemic.

The head of Cineplex told investors at the company's webcast annual meeting on Tuesday that executives will “make the necessary changes” to push through the next six to 12 months, which could see theatres temporarily closed due to the virus, Hollywood films delayed and titles diverted to streaming services.

But Jacob also fired back at a decision by Ontario leaders to force the closure of 22 of its 68 theatres in the province on less than a day's notice over the Thanksgiving holiday weekend.

The province tightened COVID-19 restrictions on various gathering spots - including gyms, restaurants, casinos and cinemas - for at least 28 days in Toronto, Ottawa and Peel Region.

The CEO characterized the move as unfair to cinema operators who have enforced staggered showtimes and distancing measures to meet requirements. He said Cineplex has seen zero cases of COVID-19 traced back to its theatres since reopening in the summer.

“When we look at moviegoing in general, it simply does not pose the same risk as other indoor services and gatherings,” he said.

“Movie theatres are fundamentally different from any other retail or restaurant environment.”

Revised provincial regulations also forced Cineplex to close two theatres in Moncton, N.B. on Friday, and another 17 in Quebec earlier this month.

Jacob acknowledged there's a further “risk that we may be required to shut down theatres at certain times” during the coming months, though he anticipated it would be “on a limited basis.”

Ontario's new restrictions stymied plans to host Cineplex's annual meeting in person at one of its Toronto theatres, a symbolic gesture of confidence in Canada's movie exhibition business which suffered another round of blows over the past week.

Beyond the temporary closure of some theatres by provincial health authorities, exhibitors also faced another delay of the latest James Bond film until next year, and a decision by Disney to scrap the November theatrical release of Pixar's “Soul” in favour of its Disney Plus streaming platform.

Jacob said to endure the latest headwinds, Cineplex has several measures on the table, including possible reductions in lease costs and making further cuts to payroll expenses.

“What remains clear in speaking with many of our studio partners is that they're committed to the theatrical release of their films and recognize that is critical to the long-term financial success of a film,” he said.

Cineplex hopes to assure moviegoers that returning to theatres is a low-risk activity in Canada, countering messages from south of the border where chains in New York and Los Angeles remain mostly closed.

The absence of those key U.S. markets has left most Hollywood studios reluctant to launch their biggest titles in any country, which intensified a cascading effect throughout the industry.

A decision by Regal Cinemas to temporarily close most of its U.S. locations earlier this month due to a lack of blockbuster films only seemed to create a knock-on effect in which studios are holding onto their most valuable films until COVID-19 restrictions are loosened.

Cineplex hopes to overcome the scarcity of big titles with a few exclusive theatrical releases, which have so far included Paramount's latest SpongeBob movie and Warner Bros. upcoming “The Witches,” which is destined for Canadian theatres shortly before it lands on streaming platform HBO Max in the United States.

But over the coming months, Cineplex will be beholden to the constantly changing Hollywood release schedule.

The delay of the James Bond film “No Time to Die” left a major dent in the company's share price, which tumbled nearly 30 per cent after the announcement on Friday. Several analysts downgraded the stock in the wake of the move, citing worries about rising debt levels.

Cineplex is also dealing with the fallout of U.K. movie exhibitor Cineworld Group PLC's decision to walk away on June 12 from a $2.8 billion deal to buy the company. The Canadian company has filed a lawsuit against its former suitor over the failed deal that it expects will begin court proceedings in September 2021.

Cineplex shares were ahead eight cents, or 1.7 per cent, at $4.71 in afternoon trading after falling as much as seven per cent earlier in the session on the Toronto Stock Exchange.