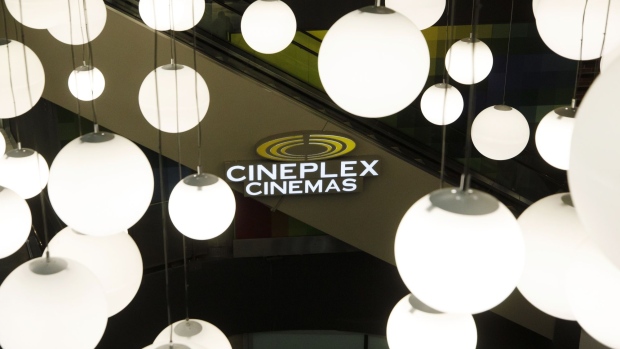 (Bloomberg) -- Cineplex Inc. struck a deal with lenders for C$250 million ($183 million) in new financing as it deals with an uncertain future after a failed takeover.

Canada’s dominant chain of movie theaters said lenders had agreed to relax covenants because of the Covid-19 pandemic, though some of the new money it’s borrowing must be used to repay existing debt. The company shut all of its venues on March 16 and most remain closed, though it plans to open some outlets in six provinces starting on Friday.

The Toronto-based company reported a loss of C$178 million for the quarter ended March 31. Cineplex said the loss included a writedown of C$173 million on property and other assets and acknowledged that the business will take a long time to recover from the pandemic.

“While it is impossible to predict how long this crisis will last and how significant the impact will be on our business, we know guests miss the magic of the big screen and sound,” said Chief Executive Officer Ellis Jacob.

London-based Cineworld Group Plc, the world’s second-largest cinema group, agreed last year to take over Cineplex for C$2.15 billion but scrapped the deal on June 12, alleging the Canadian company breached the terms of the agreement. Cineplex denied the claims and says it will file suit against Cineworld “in the near term.”

Cineplex shares closed Monday at C$9.92. The Cineworld takeover offer was for C$34 a share.

Both companies have seen their revenues crushed by the pandemic, with movie theaters across the world forced to close temporarily to slow the spread of the virus. Cineplex’s market value has plunged to about C$628 million, down from C$2.1 billion in February. Since the beginning of the outbreak, the company laid off staff and suspended dividends.

“As a result of Cineworld’s repudiation of the arrangement agreement, we focused on working with our financial partners to ensure that our long-term liquidity needs are met,” Jacob added.

As individual Canadian provinces have slowly begun to lift restrictions, Cineplex is gradually following. Six locations in Alberta have resumed operations, complete with reserved seating and other measures in place to ensure physical distancing.

Cineplex has two buys, four holds and one sell rating, with an average price target of C$14, according to data compiled by Bloomberg. Adam Shine, an analyst at National Bank Financial, last week downgraded the stock to underperform ahead of the earnings report, cutting his price target to C$10 from C$12.