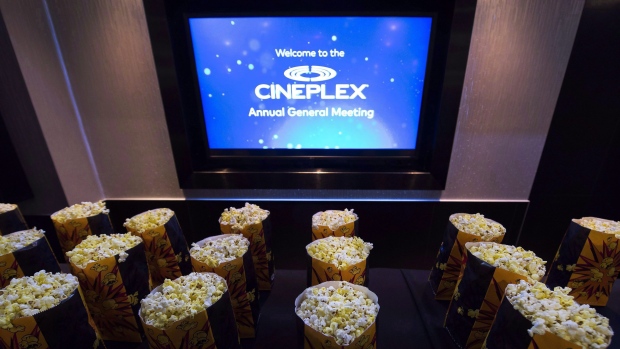 Bags of popcorn are shown during the Cineplex Entertainment company's annual general meeting in Toronto on Wednesday, May 17, 2017. , THE CANADIAN PRESS/Nathan Denette

TORONTO - Cineplex Inc. says the takeover deal it signed with Cineworld PLC has received approval from the Ontario Superior Court.

The approval brings U.K.-based Cineworld one step closer to owning Cineplex and its 165 Canadian theatres and 1,695 film screens.

The transaction is still subject to meeting closing conditions and needs approval under the Investment Canada Act.

Cineplex says the transaction is expected to be completed in the first half of 2020, at which time Cineplex will delist from the Toronto Stock Exchange and join the London Stock Exchange.

Cineplex announced in mid-December that Cineworld had offered $2.8 billion or $34 per share in cash for the Toronto-based cinema giant.

The deal landed the approval of both companies' shareholders in February.