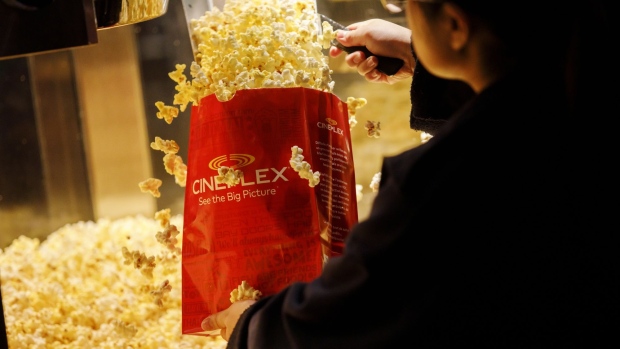 An employee fills a bag of popcorn in the concessions area inside a Cineplex Cinemas movie theater in Toronto, Ontario, Canada on Monday, Feb. 3, 2020. Britain's Cineworld Group Plc is on track to become North America's biggest operator of movie theaters with its plan to buy Canada's Cineplex Inc. for C$2.15 billion ($1.64 billion). Photographer: Cole Burston/Bloomberg , Bloomberg

(Bloomberg) -- Cineworld Group Plc said it intends to emerge from bankruptcy intact after senior lenders were said to be considering a sale process for its east European operations.

The London-based company filed for Chapter 11 bankruptcy in Texas in September to cut a near $9 billion pile of debt and leases.

“Cineworld remains committed to working with its key stakeholders to develop a Chapter 11 reorganization plan that seeks to maximize value for the benefit of moviegoers and all other stakeholders,” a spokesperson said on Sunday. “Cineworld has not initiated, and does not intend to initiate, an individual auction for any of its US, U.K. or RoW [rest of world] businesses on an individual basis.”

The statement follows a Bloomberg News report on Friday that Cineworld’s creditors had held talks about breaking up the chain and selling its eastern European operations. According to people familiar with the matter, who asked not to be identified discussing private deliberations, the company’s largest senior creditors were weighing the sale of Cinema City, Yes Planet and Rav-Chen, an Israeli operation. The eastern European operations include cinemas in Poland, Hungary and Romania.