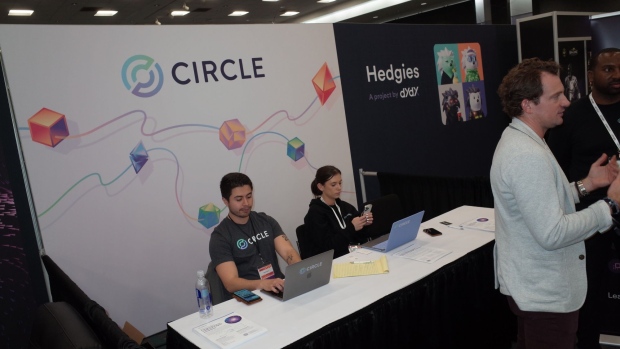 Jeremy Allaire, chief executive of Circle Internet Financial Inc., speaks during a House Financial Services Committee hearing in Washington, D.C., U.S., on Wednesday, Dec. 8, 2021. Some of the biggest names in crypto are on Capitol Hill as lawmakers weigh new rules for the white-hot asset class. , Bloomberg

(Bloomberg) -- The crypto payments startup Circle Internet Financial said it’s closer to submitting an application to operate as a bank in the U.S., pushing forward with a months-old plan even as regulators make it more difficult for crypto companies to secure this kind of license.

Circle, the issuer of the second-largest stablecoin, disclosed its intention to become a crypto bank in August and has held ongoing discussions with regulators since then, Chief Executive Officer Jeremy Allaire said in an interview. He declined to say when the company would submit the application, saying only that it would be “hopefully in the near future.”

The company, which issues USD Coin, is deeply funded. On Tuesday, Circle said it raised $400 million from BlackRock Inc., Fidelity Management and Research LLC and others. The startup plans to go public by merging with a special purpose acquisition company in a deal valued at $9 billion.

The U.S. Office of the Comptroller of the Currency, which oversees bank charters, has discussed a variety of topics with Circle management in regards to the company’s banking ambitions. Those include interoperability between blockchains and how to assess the operational risks of a specific blockchain, according to Allaire. A representative for the OCC declined to comment on the conversations with Circle.

The risk of connecting different blockchains was laid bare recently. Hacks involving crypto bridges totaled more than $1 billion in a little over a year, including a $600 million attack involving the crypto video game Axie Infinity.

If approved, Circle would be the fourth federally chartered crypto bank in the U.S. Those that have secured at least preliminary approval for a charter are Anchorage Digital, Protego Trust Bank NA and Paxos Trust Company. Getting a bank charter could be key to Circle’s future. The Federal Reserve and other U.S. watchdogs have said stablecoins need more regulation and should be issued by banks.

Circle is “making good progress” as it prepares to submit a formal application, Allaire said in the interview in Miami, where Circle hosted events related to the Bitcoin 2022 conference. There hadn’t been any delays or obstacles in working with the OCC, he said, even though the regulator heightened supervision requirements in November for banks looking to engage in crypto activities. The U.S. hasn’t granted a new banking charter to any crypto-focused company in almost a year.