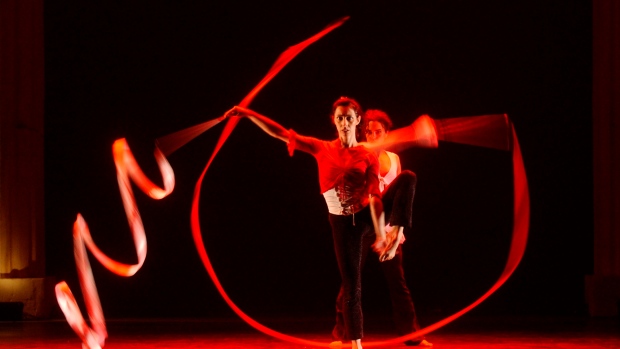 "Cirque du Soleil" artists perform during the Flying Flames show on a special night presentation for Lebanese handicapped in the Forum de Beyrouth in Beirut, Lebanon, late Wednesday, June 6, 2005, one night ahead of the opening night of the Baalbeck International Festival 2005. THE CANADIAN PRESS/AP/Press Photo

Lenders to Cirque du Soleil Entertainment Group won control of the company in a court-supervised restructuring.

The bid by the creditors’ group, which represents holders of about US$760 million in Cirque debt and includes Toronto-based Catalyst Capital Group Inc., must still receive the approval of a Canadian court. Lenders are planning to inject US$375 million of new capital into the Montreal-based company to restart its shows.

Under the proposal, first-lien creditors, owed more than US$900 million as of March 31, wind up with virtually all of the equity.

“The offer made by our secured lenders is a clear recognition of our iconic brand and of the current management team,” Chief Executive Officer Daniel Lamarre said in an email. “We are focusing on the relaunch of our shows and look forward to moving the organization forward with the prospect of returning to a profitable situation.”

The lenders have also agreed to keep Cirque’s international headquarters in Montreal for at least five years. They committed to setting up a US$15 million fund to pay laid-off employees and another US$5 million for contractors, according to the bid document. There is no government money in the proposal.

The creditors’ offer was the result of intense negotiations after existing shareholders led by TPG tabled an initial bid backed by money from the Quebec government. Creditors rejected that offer, which would have left them with a 45 per cent equity stake.

“Now with the company’s recent missteps put behind, we are eager to close the transaction quickly and support the company,” managing director and partner at Catalyst Gabriel de Alba said in an email. “Our future will take the Cirque digital and prioritize best-in-class governance and social responsibility.”

In addition to the creditor and shareholder proposals, Cirque received four other non-binding preliminary offers to buy the company, according to a report from its court-appointed monitor Ernst & Young. But none of those resulted in a formal offer that could better the creditors’ bid.

Caisse de Depot, Quebec’s largest pension fund, spent US$75 million in February to double its stake in the entertainment company to 20 per cent -- an investment it was forced to write off in June when the company filed for bankruptcy protection.