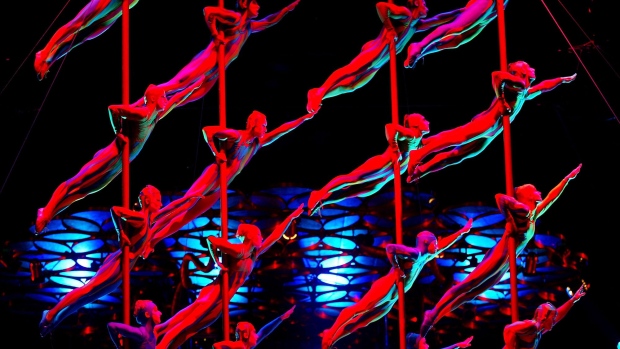 A sign for the Cirque Du Soleil Inc. KA show is displayed outside the MGM Grand Hotel and Casino in Las Vegas, Nevada, U.S., on Sunday, July 26, 2020. MGM Resorts International is scheduled to releasing earnings figures on July 30. , Bloomberg

(Bloomberg) -- Cirque du Soleil Entertainment Group emerged from court protection with new owners, a focus on the world’s biggest cities and a plan to open U.S. shows as early as next summer.

Cirque’s Las Vegas-based shows and a new production at Walt Disney Co.’s Florida resort are likely to resume first, according to Chief Executive Officer Daniel Lamarre, who kept his job after the restructuring. While some touring shows may get back on the road next year, the Montreal-based company targets 2022 to return to levels seen before the Covid-19 pandemic.

“We need to have the vaccine distributed on a scale that people will feel good to come in our places,” Lamarre said in an interview Tuesday. “We have to be back to a certain normalcy.”

Cirque, which is now owned by former creditors including Catalyst Capital Group Inc., also wants touring shows to devote more time to large markets like New York, Toronto or Tokyo, and less to smaller destinations, according to Lamarre. The company hasn’t decided yet if the number of productions will be scaled back.

The live performance company filed for creditor protection in June after the pandemic forced it to shut down all of its 44 shows. The restructuring saw first-lien creditors wind up with virtually all of the equity, while shareholders including TPG and Quebec’s pension fund had their equity wiped out. The new owners are injecting $375 million into the relaunch.

Two shows, in China and Mexico, have so far resumed operations. Cirque signed extensions for five of its Vegas shows, including four at MGM Resorts International properties, for a combined 19 years, which Lamarre called “a way to bring a lot of confidence for our new owners.”

Besides Catalyst, prominent owners include Sound Point Capital Management LP, CBAM Partners and Benefit Street Partners, according to Lamarre. The four “are here to take the time it takes to really bring value to the company,” he said.

There are no plans to sell any of the assets Cirque has added in recent years, he said.

Separately, the company on Tuesday named its board of directors, led by co-chairmen Gabriel de Alba, who’s a managing director at Catalyst, and Jim Murren, a former chairman and CEO of MGM Resorts until retiring this year. MGM Resorts has been home for several of Cirque’s Vegas shows. George Kliavkoff, another MGM executive, also sits on the board.