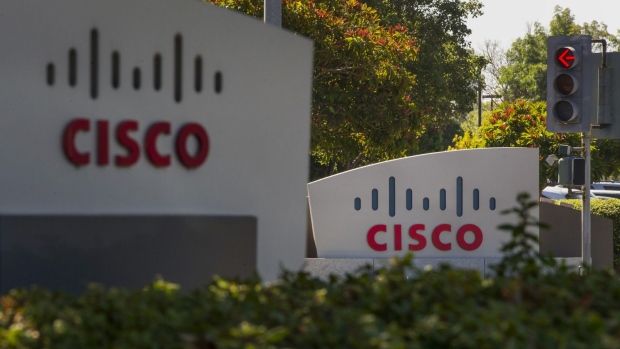 Revenue in the fiscal first quarter will grow 2% to 4%, Cisco said in a statement Wednesday. Analysts had predicted that sales would be roughly flat from a year ago, when revenue was $12.9 billion. For fiscal 2023, the company expects sales to expand as much as 6%.

The outlook suggests Cisco can weather a shaky economy and tech spending slowdown, helped by better access to supply. The company saw orders remain steady through the end of the quarter and there’s no indication that customers are tightening their budgets, according to Chief Financial Officer Scott Herren.

“We’re not seeing any signs of order cancellation,” he said. Unlike the personal computer industry, which is suffering a steep decline, networking and security technology remains essential for companies, Herren said. “It’s not optional.”

Though the company is getting more of the components it needs, shortages will drag on throughout fiscal 2023 and keep Cisco from meeting all of the healthy demand that’s out there, executives said.

While revenue growth will exceed some projections, Cisco’s profitability may not. In the current period, profit will be 82 to 84 cents when excluding certain items. For the year, earnings will be $3.49 to $3.56. Average estimates were for 84 cents in the quarter and $3.54 for the year.

Investors are focused on the company’s order rates, which provide a sense of future sales. Growth by that measure accelerated to 15% in the fourth quarter from the prior period, the company said. That increase had slowed to just 8% in the fiscal third period after a run of quarters when it was over 30%.

Cisco’s stock performance has reflected those concerns this year. The company has given up more than a third of its market capitalization in 2022, putting the onetime king of Silicon Valley at less than $200 billion.

Under Chief Executive Officer Chuck Robbins, Cisco has been trying to spur growth with updated hardware and software, as well as new services provided over the internet. The idea is to pursue more sources of revenue, beyond the networking equipment that is Cisco’s hallmark.

Reflecting that shift, Cisco’s unit that contains hardware shrank about 1% in the third quarter. Security and its business that sells optimization of internet-based services had strong growth.

Revenue in the three months ended in July was $13.1 billion, flat from a year ago. Excluding some items, earnings per share was 83 cents. Analysts had projected sales of $12.7 billion and profit of 82 cents.