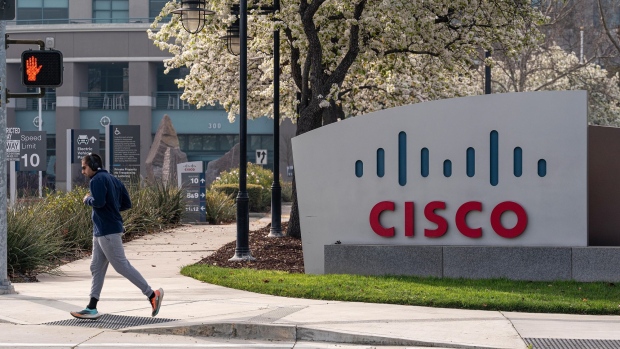 (Bloomberg) -- Cisco Systems Inc., the biggest maker of computer networking equipment, predicted its revenue will grow 5% to 7% over its next four fiscal years, outpacing analysts’ projections. That sales increase will allow earnings per share, minus certain items, to expand at the same rate, Chief Financial Officer Scott Herren told analysts and investors Wednesday. Wall Street had been projecting growth that would top out at 6% in fiscal 2022 and then decelerate, according to data compiled by Bloomberg.   The upbeat outlook was presented as evidence that Chief Executive Officer Chuck Robbins’s attempts to overhaul the Silicon Valley stalwart are paying off. He’s been transforming the company into a provider of networking services delivered over the internet and a seller of software -- rather than just an equipment supplier.

The company has traditionally generated the bulk of its revenue from the expensive switches and routers that form the backbone of computer networks, but that’s changing. Revenue from subscriptions will reach 50% of Cisco’s total by fiscal 2025, the company predicted Wednesday.

Cisco shares rose as much as 3% to $59.60 in New York on Wednesday, the biggest intraday gain in almost a month, before paring the gains. The stock had already climbed 29% this year through Tuesday’s close.

Executives of the San Jose, California-based company said Cisco is getting a boost from the work-from-home shift. Companies are rushing to upgrade their hardware and software to accommodate the change. And they’re adding security and shifting workloads to cloud service providers, a market that Cisco is now increasingly serving with new products.