Cisco tumbles most since 2020 as supply upheaval weighs on sale

Cisco Systems Inc. spooked investors with a warning that Chinese lockdowns and other supply disruptions would wipe out sales growth in the current quarter, sending its shares plummeting the most in more than a decade and renewing broader concerns about tech spending in a shaky economy.

Cisco shares fell 14 per cent to US$41.72 at Thursday’s close, the worst one-day drop since February 2011. The decline weighed on stocks of other networking companies, dealing a fresh blow to an already-battered sector. The shares have plunged 34 per cent this year.

The question for much of Wall Street was whether Cisco’s forecast meant that customers were cutting spending, but the networking-equipment giant said supply woes -- and not a pullback in expenditures -- was the main problem.

“Even though these top-line numbers don’t look good, there’s a very simple explanation,” Chief Executive Officer Chuck Robbins said on a conference call with analysts. “Customers are not signaling any real shift at this point. There’s no reflection of demand issues in our guidance.”

Robbins acknowledged that Cisco wasn’t prepared for production to be closed down so extensively in China, a move triggered by the country’s COVID Zero policy.

“We did not have a plan for a country to shut down,” he said. “And so it takes time to go out and create that geographic resilience, but our teams are working on all of those kinds of things right now.”

China’s lockdowns have hurt production from many companies, including Tesla Inc. and Sony Group Corp. Robbins said it’s not yet clear when supplies will return to normal, despite signs that government restrictions are easing in certain areas.

“Shanghai now is saying they’re going to open up June 1 -- we don’t know exactly what that means,” he said. When the reopening happens, “there is going to be lots of competition for ports capacity, airport capacity.” 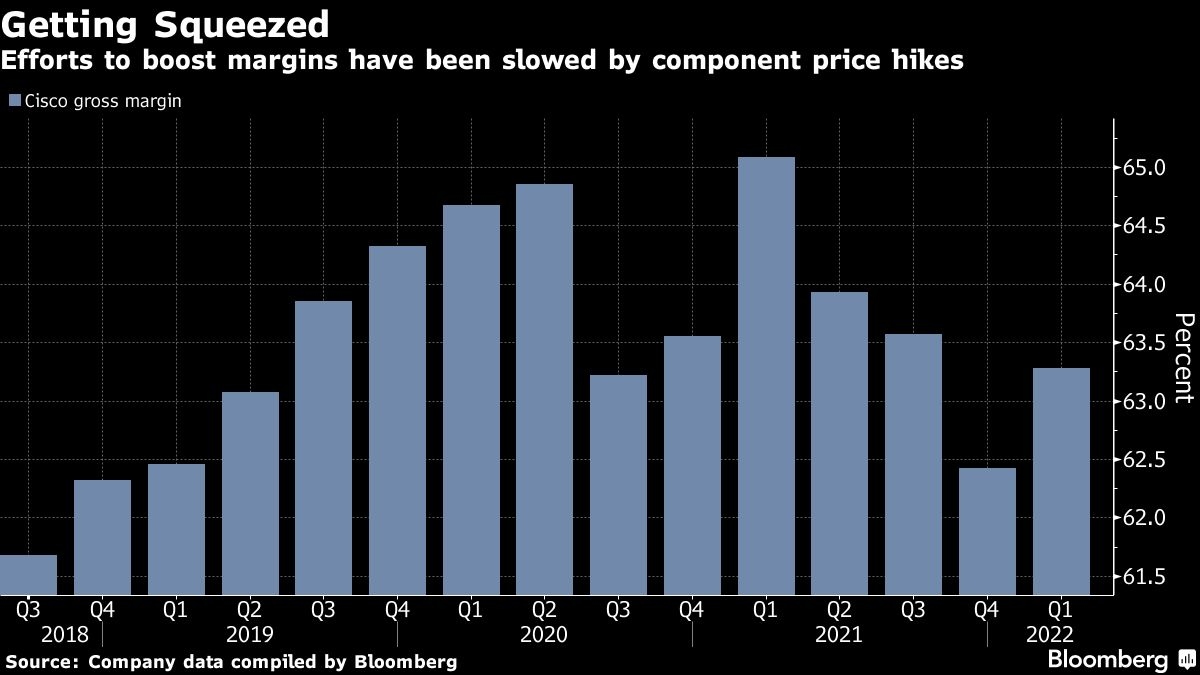 Cisco is the biggest maker of machines that power corporate networks and form the backbone of the internet. Investors look at its outlook as a proxy for corporate spending on infrastructure, which is why the sudden shift was especially jarring.

The company had predicted growth in the current quarter of about 6 per cent. It said Wednesday that sales would actually decline by 1 per cent to 5.5 per cent in the period, which ends in July. Cisco’s earnings forecast also was short of Wall Street predictions.

Broader chip shortages and the war in Ukraine also have created disruptions for Cisco and its peers.

Like many tech companies, Cisco began cutting ties with Russia after that country invaded Ukraine earlier this year. The company said Wednesday that stopping business in Russia and its ally Belarus cost it about US$200 million in revenue during the fiscal third quarter. Historically the region, including Russia, Belarus and the Ukraine, has accounted for about 1 per cent of total sales.

On the conference call with Cisco executives, analysts questioned whether the weak guidance indicated that customers are concerned about their own future prospects and have begun to cut their spending.

Robbins insisted that demand remains robust. That said, the company doesn’t expect supply shortages to be resolved in the current quarter.

The inability to get power supplies from China cost Cisco US$300 million in revenue in the third quarter, executives said. And even when the lockdowns end in China, the problem won’t be solved right away.

The tone of the report was a stark contrast from three months ago, when Cisco said orders rose more than 30 per cent for a third consecutive quarter. Since then, investors have become more concerned that inflation and fears of slowing economic growth will make customers more cautious. This past quarter, the company said it orders increased 8 per cent.

While that’s a much slower rate of expansion, it shows strong growth ahead for a company of Cisco’s size, according to David Heger, an analyst at Edward D. Jones & Co.

“I would be more concerned if that order number was flat or down,” Heger said.

Cisco has implemented a no-cancellation policy on its orders within 45 days of the shipping date, according to Chief Financial Officer Scott Herren. Smaller customers, who tend to be the quickest to tighten their spending budgets, increased orders 19 per cent. The growth and the overall low rate of cancellations give the company confidence that there are no underlying demand issues, Herren said in an interview.

Under Robbins, Cisco has been trying to spur growth with updated hardware, as well as new services and software. The hope is to make the longtime king of networking gear less dependent on one-time equipment sales.

The latest outlook marks a setback in that push. Excluding certain items, earnings will be 76 cents to 84 cents a share in the period, Cisco said. That compares with an average estimate of 92 cents.

For the year, revenue will grow 2 per cent to 3 per cent, the company said, compared with a previous prediction of as much as 6.5 per cent.

Revenue in the three months ended in April, was US$12.8 billion, little changed from a year ago. Earnings per share, minus certain items, was 87 cents. Analysts had projected a profit of 86 cents on sales of US$13.3 billion on average.

But without signs that orders truly are slowing, Wall Street may be overreacting to Cisco’s numbers, Heger said.

“Short of some big drop-off in demand, it seems as though the market is overcompensating,” he said.