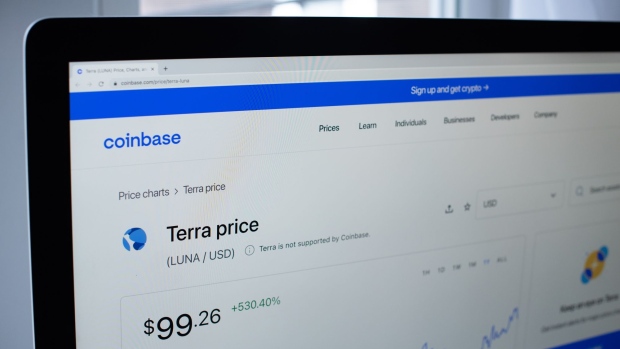 Terra's Luna token value on the Coinbase website on a computer arranged in Hastings-on-Hudson, New York, U.S., on Friday, April 8, 2022. A nearly 20% interest rate is unheard of in most of traditional finance. But that's exactly what Anchor Protocol is promising people willing to deposit the crypto stablecoin UST into its decentralized finance app. Photographer: Tiffany Hagler-Geard/Bloomberg , Bloomberg

(Bloomberg) -- Citadel Securities, no stranger to social-media controversies, has found itself the subject of another one: the collapse of TerraUSD, which it says it had nothing to do with.

The trading firm says it is not involved in the situation and “does not trade stablecoins, including UST,” a representative for the firm told Bloomberg, repudiating claims circulating on social media in recent days.

TerraUSD, or UST, an algorithmic stablecoin, has spiraled to new lows, breaking its peg of one-to-one to the dollar. The collapse poses perhaps the biggest test yet to decentralized finance and the will of its backers to defend it.

The situation sparked a barrage of speculation about the cause, with some naming Citadel Securities and others. Such was the intensity that Ken Griffin’s market-making firm decided to respond. Last year, Citadel found itself subject to attacks related to its role in the meme-stock frenzy involving GameStop Corp. and other companies.

The backers of the TerraUSD algorithmic stablecoin are trying to raise about $1.5 billion to shore up the token after its crash, but are struggling to win investor support for a rescue, Bloomberg reported Wednesday.