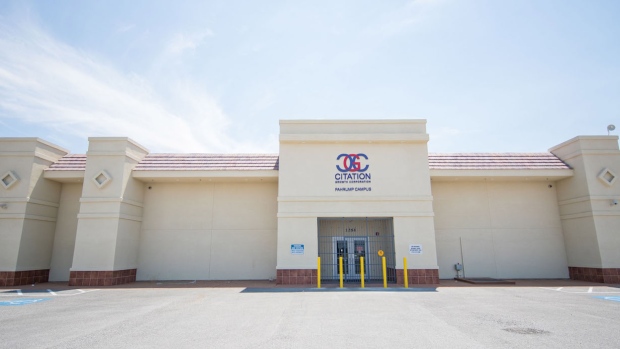 The Pahrump Campus in Nevada. , Image courtesy of Market One Media

Nevada’s cannabis market hit USD$639 million in sales in its most recent fiscal year, which is a 20 per cent jump from USD$530 million over the same period last year. The key difference is that 2019 was the state’s first full year where recreational cannabis use was legal. So, with more than 60 million tourists visiting Nevada each year, the potential for growth is momentous.

Over the last few years, Canada and several U.S. states have legalized recreational cannabis, however, the resulting rush of companies into the nascent marketplace has generated volatile results for early investors. This has prompted some analysts to recommend looking at the industry through a new lens and consider cannabis as a long-term investment with the potential to pay off over time as companies mature, and especially as cannabis use eats into alcohol and pharmaceutical sales.

Entering the cannabis market as a triple-threat contender

“Producing triple-certified organic cannabis makes us the only facility in the country with this designation. It allows the consumer to feel comfortable with the product they are purchasing while being confident, they will not be harmed in any way.”

The company completed the acquisition of American Cannabis Cultivators in August this year, bringing it a rich collection of genetic strains and new CEO, Howard Misle’s 16-year track cultivation record. Not only this, Citation also inherited a substantial foothold in Nevada’s tremendous marketplace with licenses for up to 569,600 sq ft of cultivation, making the company one of the largest licensed footprint holders in a state that has a current moratorium on licenses.

Establishing strong operations in a state popular with year-round tourists will set the company up for financial stability and will thus allow growth into other marketplaces where it already holds cultivation and distribution licenses. Citation’s President, Rahim Mohamed, notes, “Last year, approximately 62 million tourists entered the state of Nevada, predominantly in the city of Las Vegas. That is nearly double the population of Canada moving through one city in one year.”

Mohamed explains that the company has an established cultivation facility in Pahrump, about 50 minutes outside of Vegas, and has just completed construction of a production facility closer to the city located in North Las Vegas in October 2019. Facilities in North Las Vegas each have three organic certifications: EnvirOrganic Farm Certification, Certified Kind, and Clean Green Certified. These organic certifications are also underway in Pahrump.

Citation’s certifications make the company the only triple-certified organic cannabis producer in the state, a key differentiator with health-conscious cannabis consumers.

“Producing triple-certified organic cannabis makes us the only facility in the country with this designation,” adds CEO, Howard Misle. “It allows the consumer to feel comfortable with the product they are purchasing while being confident, they will not be harmed in any way.”

The promise to produce premium cannabis for consumers comes at an important time when other cannabis producers have faced backlash over tainted products hitting the market without being detected. Canopy Growth Corp and OrganiGram Holdings have both faced the consequences of selling tainted products to consumers back in 2017.

Despite the negativity hitting the press around cannabis, Citation is setting a new standard for its quality control measures in every jurisdiction that it operates in. The company cultivates specific genetics using state-of-the-art processes and grows its product in small batches in living soil. Growing cannabis in smaller batches in controlled environments allows Citation to maintain quality and minimize losses caused by any issues, which has dogged some producers in this new industry. Additionally, the company cures its end product instead of adhering to the more typical dehydration method.

Citation cultivates every three days in Pahrump and every seven days in North Las Vegas, and all of its cannabis is pre-sold, meaning the company is not storing any of its cultivated cannabis for long periods of time, allowing for maximum freshness.

“Our goal is not to be a mass producer of cannabis, but rather a supplier of quality cannabis,” Misle explains. “We really want to be known for our premium quality. There are going to be growing pains in any new industry. However, we’re learning from the mistakes of others, which has taught us to do some things differently.”

Growth, licenses, and hope for CBD

Citation has cultivation facilities in California, Washington State, and British Columbia, Canada at various stages of development, all with the same goal of becoming certified organic producers. Citation also has fully operational, extraction and production facilities in North Las Vegas at their Apex campus.

In Washington State, the company has 13.8 acres of cannabis-zoned property, and in California’s Desert Hot Springs, Citation has two cultivation and production centers in the works. Both facilities in Washington and California will be further developed once the sites in British Columbia have been completed.

While cultivating its organic strains is the immediate priority, moving from a wholesale provider to a larger retail footprint is next.

“For us to be really profitable we have to be a seed-to-sale integrated company, so having a dispensary is on the top of our priority list,” Mohamed explains.

The company has seven retail licenses in Nevada that it could develop into dispensaries in the future and is looking at potentially purchasing some existing dispensaries as well. Selling directly into the retail market would potentially double their current $1-million monthly revenues in the state, with many organic products selling for about USD$3,000-$3,200/pound wholesale and climbing up to USD$8,300 retail.

In the future, Citation plans on expanding sales into additional marketplaces by white labelling their products and bringing other producers’ products into their stores. Interestingly, they are also tracking the emerging marketplace for CBD oil, a cannabis extract used to help people with anxiety, cognition, movement disorders, and pain.

“We eventually hope to get into CBD,” Misle says. “It is on our radar and we are working on that as we speak.”

An extremely talented and knowledgeable team leads Citation. Misle, alone, has been involved in the cannabis sector since 2003 and played an integral role in the Nevada cultivation scene since legalization.

The company also boasts President and Director, Rahim Mohamed, who’s 23-year international career in the private and public sector has propped him up to be instrumental in closing multiple mergers and acquisitions; and positioning Citation as one of the largest licensed footprint holders in the state of Nevada.

For investors learning about the company — based on its projections, Citation expects its total revenues in Nevada to hit over $350 million annually, upon completion of the entire build out in both Pahrump and North Las Vegas. The company is on the rise, and it’s strategically making its way through the evolving cannabis sector.

With Citation’s brand portfolio, its flagship facilities in Nevada already generating revenue, paired with the company’s organic methodology and more, it is evident that Citation’s trajectory to become a leading powerhouse is on the horizon.