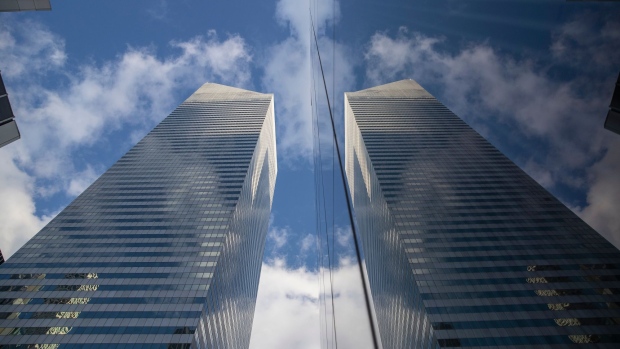 Citigroup headquarters in New York, U.S., on Friday, Jan. 7, 2022. Citigroup Inc. was the first major Wall Street bank to impose a strict Covid-19 vaccine mandate: Get a shot or face termination. With its deadline fast approaching, the company is preparing for action. , Bloomberg

(Bloomberg) -- Citigroup Inc. asked staffers in the New York City region to begin returning to the office early next month as cases start to recede in the area. Citigroup has already asked its London staff to come into the office at least three days a week.

New York’s omicron outbreak is weakening, though not evenly throughout the state, and pressure on health-care facilities remains high, Governor Kathy Hochul said.

Ireland is dropping most pandemic restrictions, the latest sign that Europe’s approach to Covid-19 is shifting toward something resembling a road back to normal. England, France and Belgium are also easing curbs even as omicron cases remain high.

It’s extremely unlikely that a person can be reinfected with omicron, at least in the short-term, said Anthony Fauci, President Joe Biden’s top medical adviser.

Australia will allow international air travelers to enter the country if they provide results from a rapid antigen test taken within 24 hours of departure.

A RAT must be undertaken by or under the supervision of a medical practitioner that includes pharmacists or trained personnel at airport testing stations, the Ministry of Health said on its website Saturday in Sydney.

Until now any incoming traveler needed to complete a PCR test within three days of departure. The change is effective from 1 a.m. Sunday.

Utah’s state legislature overruled mask mandates put in place by two counties, including one that encompasses the capital of Salt Lake City, as the omicron variant surged.

“I believe we have done a disservice throughout this country as we’ve approached the Covid-19 pandemic in trying to find government solutions,” Representative Jordan Teuscher, part of the legislature’s Republican majority, was quoted as saying by the Salt Lake Tribune.

Health officials in the two counties urged residents to continue masking and taking precautions against the virus. New infections in Utah have been running more than twice as high as previous pandemic records.

Citigroup Inc. asked staffers in the New York City region to begin returning to the office early next month as cases start to recede in the area.

Employees in New York, New Jersey and Connecticut were asked to prepare to come back on Feb. 7. For other locations across the U.S., Citigroup will continue to monitor local health data before inviting more workers to return. A spokeswoman confirmed the bank’s plans.

Citigroup has already asked its London staff to come into the office at least three days a week after the U.K. government said people no longer needed to work from home.

It’s extremely unlikely that a person can be reinfected with omicron, at least in the short-term, President Joe Biden’s top medical adviser said, as the U.S. begins to see sharp declines in cases in places hit earliest by the variant.

“There are reinfections, but it is unlikely that -- if you mounted a good immune response -- at least over a period of several months, it is extremely unlikely that you will be reinfected with the same variant,” Anthony Fauci, the director of the National Institute of Allergy and Infectious Diseases, said in a press briefing on Friday.

France reported more than 400,000 cases for the fourth day in a row, less than two weeks before pandemic restrictions are scheduled to ease.

French leaders are betting that infections will recede, in part due to restricting most social activities -- from eating in a restaurant to taking a train -- to fully vaccinated people. The measure, scheduled to take effect Monday, won backing from France’s constitutional court on Friday.

Ireland is dropping most pandemic restrictions, including early closing times for bars and restaurants and a work-from-home order, Prime Minister Micheal Martin said.

It’s the latest sign that Europe’s approach to Covid-19 is shifting toward something resembling a road back to normal as concern surrounding the omicron variant eases even amid record cases.

“I have stood here and spoken to you on some very dark days, but today is a good day,” Martin said in a national address. “We have weathered the omicron storm.”

U.K. health authorities said they’re investigating a version of the omicron variant based on an increase in the number of cases, but that it’s too early to evaluate its importance or severity.

The data on the omicron subvariant, known as BA.2, are limited, according to the agency. The agency said 426 cases have been confirmed in England, with the earliest dated Dec. 6.

Belgium, which shattered daily Covid-19 case level records this week, introduced a color-coded “barometer” aimed at charting a path out of pandemic restrictions based largely on the situation in the hospitals. Changes to the current rules are minor at first, with restaurants and bars allowed to stay open an hour later, until midnight.

But as the omicron wave recedes, more rules will be loosened. Belgium is also imposing a new limit on the Covid Safe Ticket used to access bars and restaurants, saying it will be invalid five months after the initial vaccination sequence without a booster shot.

“We will be able to get out of the pandemic and find ourselves in an endemic situation,” Belgian Prime Minister Alexander De Croo said a news conference, according to Belgian daily Le Soir.

The U.S. government is suspending 44 flights by Chinese airlines in response to restrictions placed on American carriers over Covid-19 testing protocols.

The U.S. Department of Transportation on Friday issued restrictions against four Chinese airlines in a dispute that has been percolating since the pandemic erupted in 2020. China in recent months had suspended flights on Delta Air Lines Inc., American Airlines Group Inc. and United Airlines Holdings Inc. in violation of a treaty on flight access, the DOT said.

A federal judge in Texas granted Friday a nationwide preliminary injunction against President Biden’s Executive Order mandating that all federal workers consent to be vaccinated against Covid-19 or else face termination.

The order poses a substantial threat of irreparable harm to the “liberty interests of employees who must choose between violating a mandate of doubtful validity or consenting to an unwanted medical procedure that cannot be undone,” Judge Jeffrey V. Brown of the U.S. District Court for the Southern District of Texas said.

Last week, the Supreme Court blocked an Occupational Safety and Health Administration rule that would have required employers with 100 or more workers to make them get vaccinated or be tested regularly.

The annual Davos gathering of political leaders, top executives and celebrities has set new dates for an in-person event, forsaking the ski season for a balmier week from May 22 to 26.

This year, the World Economic Forum had to postpone the January event with Covid cases surging. But after the Swiss government announced on Wednesday that it will ease travel restrictions for vaccinated and recovered persons from Jan. 22, the organization founded by Klaus Schwab decided the situation was promising enough to set a new date.

New York’s omicron outbreak is weakening, though not evenly throughout the state, and pressure on health-care facilities remains high, Governor Kathy Hochul said.

New cases reported Friday dropped to 28,296 from a high of more than 90,000 less than two weeks ago. The percent of positive cases statewide is 9.75%, in the single digits for the first time in weeks, Hochul said. The holiday surge peaked on Jan. 2 with 23% positivity, she said.

“This is still to be taken very seriously. We are not letting our foot off the pedal,” Hochul said at a press briefing.

“I can’t feel my own body,” Walesa, 78, said on his Facebook account on Friday. “It feels like my flesh is being torn away from the bone.”

Walesa, 78, said he was triple vaccinated

Booster doses of Covid-19 vaccines increased protection against both the delta and omicron variants in three studies that looked at infections, hospital admissions and deaths in thousands of U.S. patients.

Third doses of messenger RNA vaccines made by Moderna Inc. and the partnership of Pfizer Inc. and BioNTech SE were at least 90% effective in preventing hospitalizations during both the delta and omicron periods, according to an analysis of hundreds of thousands of hospitalizations and clinic visits. The shots’ protection against Covid deaths was diminished after omicron’s rise, but remained significant, according to a separate study from the U.S. Centers for Disease Control and Prevention.

JPMorgan Chase & Co. was among banks firming up return to office plans in London. It has asked staff to come back for at least some days a week from Feb. 1.

Deutsche Bank AG earlier told staff it will start bringing more of them back to their desks from the end of January. Barclays Plc staff have been told they can return to the office from Monday, according to a person familiar with the matter.

Many staff have been working remotely since the U.K. government introduced guidance to do so in December. That was unwound on Wednesday. Separately, the Mayor of London, Sadiq Khan, said he is standing down the “major incident” status over Covid-19 in London.

WHO Recommends Shot for Kids But Not Second Boosters (9:24 p.m. NY)

A World Health Organization panel recommended the Pfizer Inc.-BioNTech SE vaccine for children aged 5 and older. The recommendation is for a reduced dosage, according to the Strategic Advisory Group of Experts on Immunization, which met on Wednesday.

Separately, a panel is following the data emerging from a limited number of countries, especially Israel, on second boosters, but isn’t endorsing them due to lack of evidence.

Meanwhile, about 1.5% of athletes and others entering Beijing for the Winter Olympics are testing positive for Covid, with all of the infections caught within five days of arrival, the International Olympics Committee’s Covid-19 support team said.

Germany should stick with its current pandemic restrictions even as the omicron variant fuels record daily cases, according to Stephan Weil, the premier of the state of Lower Saxony.

“The infection numbers are significantly higher but at the same time hospitals are thankfully relatively less under pressure,” Weil said on ARD television ahead of Monday’s regular discussion of pandemic strategy between Chancellor Olaf Scholz and Germany’s 16 federal state leaders.