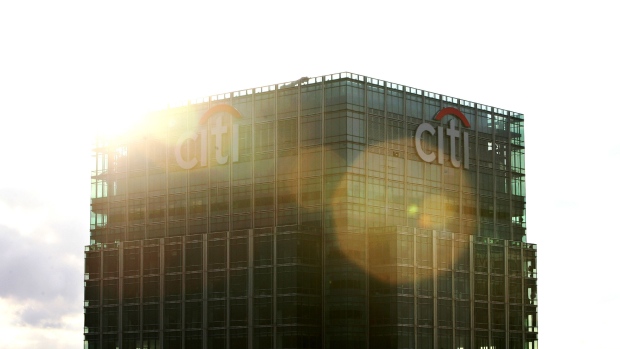 In 2017, after Citigroup Inc. had paid billions of dollars in fines for rigging interest rates, manipulating currency markets and selling shoddy mortgage bonds, the Wall Street giant was still struggling to keep tabs on some trades in London.

Managers overseeing Citigroup’s European trading hub had hundreds of blind spots, allowing for potentially abusive transactions to go unnoticed in the almost 900,000 trades processed every day at the bank’s Canary Wharf headquarters, according to a report from the UK Financial Conduct Authority. The shortcomings carried on for at least two years, at the same time its traders were generating about £2.6 billion ($3.1 billion) in revenue, the report shows.

Internal compliance teams found that their surveillance systems missed almost half of the second-most serious category of trading risk, the FCA said as it imposed a £12.6 million penalty on New York-based Citigroup on Friday. Officials couldn’t effectively monitor trading activities for potential insider dealing and spoofing until early 2018, the regulator said.

The FCA report noted that “little, or no, profits were made or losses avoided as a result of the breaches, either directly or indirectly.”

Citigroup Chief Executive Officer Jane Fraser, who oversees one of the world’s biggest investment banks, is under pressure to improve controls after multiple probes revealed what regulators have said are substantial problems.

The Bank of England levied a record £44 million fine on the lender in 2019 for years of inaccurate reporting about its capital and liquidity levels, while US regulators doled out a $400 million fine in 2020 for persistent problems with risk management. Hong Kong’s securities regulator fined it HK$348.3 million earlier this year for “dishonest” stock trading over a decade.

“This fine is indicative of Citigroup’s troubled past and the ways its failures so often come back to haunt it,” said Kathryn Judge, a law professor focused on finance at Columbia University in New York. “It helps to justify the changes that Fraser is seeking to implement.”

Rekha Jogia-Soni, a spokeswoman for Citigroup in London, said the bank is “pleased to put this matter behind us.”

Integrity in financial markets depends on a partnership between the FCA and banks using data to detect suspicious trading, Mark Steward, executive director of enforcement and market oversight at the regulator, said in a statement. Citigroup “did not carry its full weight in this partnership,” he said.

In January 2018, when Citigroup’s compliance teams scrambled to assess the effectiveness of its automatic surveillance systems, they discovered that they had no oversight of almost half of what they called tier 2 trading risks. The surveillance gaps occurred across some of the bank’s largest trading businesses including rates and commodities.

The multiple shortcomings convinced Citigroup that it was not in compliance with European market-abuse laws, which the UK implemented in 2016.

“It does not appear that there was appropriate governance, regulatory change management oversight, or appropriate escalation to management about this issue,” the bank said in an internal update after the 2018 assessment.

The compliance group’s senior leadership team has since changed, the FCA said, and the identified surveillance gaps were fixed by the end of 2018.

Fraser, who became CEO in early 2021, is overseeing a yearslong campaign to shore up internal systems and data programs that will end up costing Citigroup billions of dollars. The bank agreed to resolve the FCA case, qualifying for a 30% discount on its fine.

Citigroup is home to a behemoth trading business that makes billions of dollars every year from buying and selling everything from stocks and government bonds to complex derivatives. The division reported almost $15 billion of revenue in 2017, about the same as the total revenue of global drinks retailer Diageo Plc that year.

The division, which traces its roots to former Wall Street powerhouse Salomon Brothers Inc., has a troubled recent history. Some of the trades that resulted in fines over the years occurred at Citigroup’s fixed-income trading division in London, which deals in products tied to interest rates, FX, corporate debt and commodities. But almost a decade after the financial crisis, risk officials were still struggling to properly monitor this business, the FCA report shows.

While Citigroup officials were comfortable with their oversight of the FX-trading business, they identified dozens of risks elsewhere at the fixed-income division, as well as in its equities unit, that were not under surveillance, according to the FCA.

At Citigroup’s rates-trading business, which deals in government bonds and derivatives linked to interest rates, officials flagged 5 tier-2 risks and found that none of them were being covered. The bank’s commodities unit, which was the joint-biggest in the world that year, had 10 such risks but only 5 of them were under surveillance. And a business dealing in corporate debt and securitized products had 18 similar threats and less than half of them were being observed.

In a separate case, the FCA’s own data engine picked up potentially suspicious trading by a Citigroup credit trader in late 2017 before the bank’s own compliance teams fired him for spoofing.