Citigroup Inc. (C.N) gave investors the first look at how Wall Street banks fared during the violent market swings at the end of 2018 -- and it’s grim.

Revenue from fixed-income trading, the lender’s largest securities business, plunged 21 per cent in the fourth quarter to the lowest in seven years after wild markets kept clients on the sidelines. Combined revenue from stock and bond underwriting dropped more than analysts estimated. And the company missed a full-year profitability target by an even wider margin than it signaled just five weeks ago.

“A volatile fourth quarter impacted some of our market-sensitive businesses, particularly fixed income,” Chief Executive Officer Michael Corbat said Monday in a statement disclosing results. The firm will focus on improving profitability this year, he said.

Bank shareholders have been in the dark for weeks, eager to learn whether traders and dealmakers were able to navigate global market swings including the biggest monthly drop in the S&P 500 Index since 2009. Analysts including Barclays Plc’s Jason Goldberg had cautioned clients that Citigroup’s most recent guidance came in early December, before the storm worsened.

Bright spots included a 47 per cent jump in revenue from advising on mergers and acquisitions, which reached US$463 million. The bank’s treasury and trade solutions business, which helps corporations move money around the world, boosted revenue 7 per cent to US$2.4 billion -- surpassing the firm’s fixed-income traders for the first time. They only generated US$1.94 billion -- falling below US$2 billion for the first time since the final quarter of 2011. It was their worst performance under Corbat.

Just three months ago, things were looking brighter for the fixed-income division, which handles bonds, commodities and currencies. In mid-October the bank disclosed that the business had snapped five straight quarters of declining revenue. When news of the turnaround broke, it helped send the stock up as much as 4.2 per cent that day.

Revenue from Citigroup’s sprawling credit-card unit, the largest in the world, increased 1 per cent to almost US$5.1 billion during the quarter. Investors have grown increasingly worried about the business as rising interest rates have tempered consumers’ demand for such loans. Citigroup has been curtailing its promotional offers while encouraging existing customers to maintain balances on their cards. 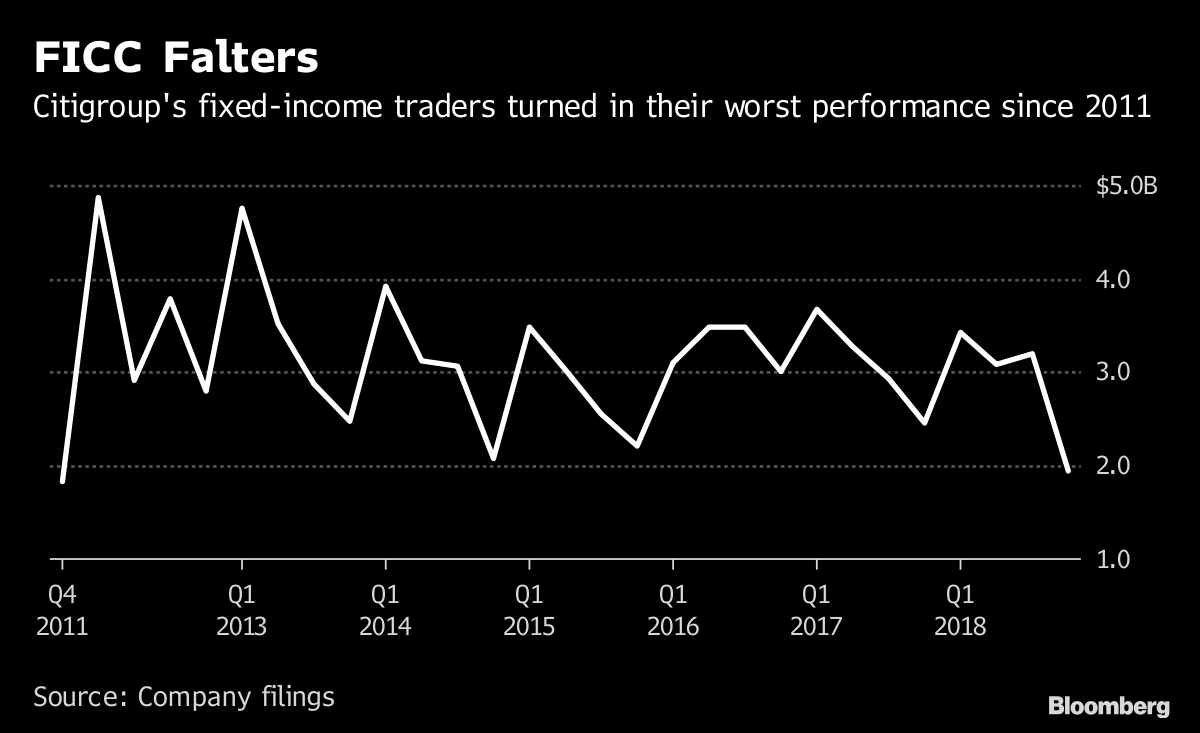 The lender said it still believes it can achieve a return on tangible common equity of 12 per cent in 2019, up from 10.9 per cent last year.

The bank’s efficiency ratio, a measure of how much it costs to produce a dollar of revenue, dropped to 57.4 per cent last year, 86 basis points better than the prior year. The company had been aiming to shave 100 basis points from that measure last year, but Gerspach said in December the move might be closer to a 90 basis-point decline.

--With assistance from Sam Mamudi