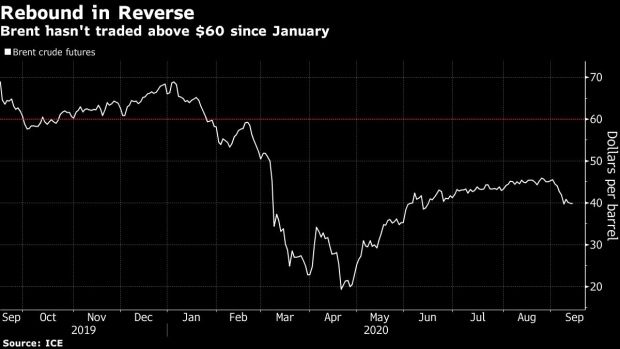 (Bloomberg) -- Citigroup Inc. has a message to cheer up despairing oil bulls: prices will get back to $60 a barrel before the end of 2021.

“We’re bullish definitely,” Ed Morse, global head of commodities research at Citi, said in an interview during the S&P Global Platts Asia Pacific Petroleum Conference. “In our base case, prices go up because the market balances” and gigantic inventories are drawn down, he said.

The rate at which those stockpiles are shrinking appears to have slowed in recent weeks as the coronavirus proved stubbornly persistent and the OPEC+ alliance returned barrels to the market. That’s pushed global benchmark Brent crude down around 12% so far this month.

It will take until late 2021 for global oil consumption to return to the 2019 level of 101 million barrels a day due to growth in economy, Morse said. Citi sees global benchmark Brent crude, which is currently trading near $40 a barrel, averaging around $55 in 2021 before getting back to the $60 mark by the end of the year. West Texas Intermediate will recover to $58 by then.

Commodity trading giant Trafigura Group, however, expects crude stockpiles to increase through the end of this year on weak demand, with the market to look “worse in a couple of months from now.” That compares with Citi’s prediction for Brent oil to climb and average $48 a barrel during the fourth quarter.

For Citi, petrochemical feedstock and gasoline will be the biggest growth drivers for fuels, while the consumption of jet fuel is expected to stage a comeback in 2024-2025, Morse said.

Brent’s move back above $60 could be short-lived, however, as higher prices will lead to a rebound in American production, Morse said. There are also several unknown factors -- including whether Iranian output will come back in a significant way -- that could affect the market, he said.