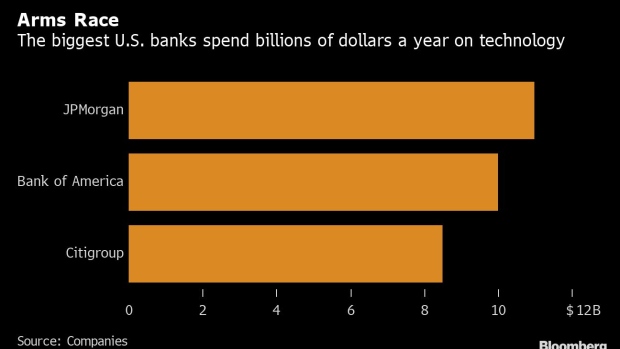 (Bloomberg) -- Citigroup Inc. plans to recruit 2,500 programmers this year for the unit that houses its traders and investment bankers, bulking up on coders and data scientists as technology reshapes the business.

Roughly three-quarters of the company’s trade orders last year were electronic, according to Stuart Riley, global head of operations and technology for the bank’s Institutional Clients Group. The ICG arm will add programmers in locations from New York to Chennai, India.

The hires reflect “what we are building in technology and why we are focused on making salespeople and traders more effective at servicing our clients,” Riley said in an interview at Citigroup’s Canary Wharf office in London. “Technology is augmenting what humans do by making better use of data.”

Global banks are investing billions in a race to apply technologies that make front-office staff more efficient and keep clients trading. Goldman Sachs Group Inc. and JPMorgan Chase & Co. are among other firms that are hiring as computer specialists change the face of trading floors across Wall Street.

JPMorgan spends $11 billion on technology every year, while New York-based Citigroup budgets roughly $8.5 billion, or about 20% of total expenses. Bank of America Corp. has said it spends approximately $10 billion on technology, with about $3 billion of that going to new projects.

Citigroup has started reaping the benefits of those investments in recent years, saying they’ll help save as much as $600 million in 2020. The bank, which already has 23,000 technology specialists in its ICG business globally, said the new roles will be in London, New York, Shanghai, Toronto, Dublin, Tel Aviv, Pune and Chennai in India, and Tampa, Florida.

Tech giants are already waging a battle for talent in Citigroup’s hometown. Facebook Inc. said it’s planning to hire more than 3,000 people over the next three to five years in New York City, while Amazon.com Inc. announced plans to lease space in Manhattan that will house 1,500 workers.

Citigroup’s new recruits will work on projects including solutions in equities and fixed income, according to Riley. The bank has already used its tech teams to automate news, analytics, pricing and trade ideas for salespeople by drawing on their message exchanges with clients, Riley said.

About two years ago, the bank had 30 spaces for a Python coding class and was inundated with requests, according to Riley. It now has 1,600 front-office staff trained in the computer language.

“The delineation between traders and technologists in markets is disappearing,” he said.

To contact the reporters on this story: Viren Vaghela in London at vvaghela1@bloomberg.net;Jenny Surane in New York at jsurane4@bloomberg.net

To contact the editors responsible for this story: Ambereen Choudhury at achoudhury@bloomberg.net, Marion Dakers, Steve Dickson