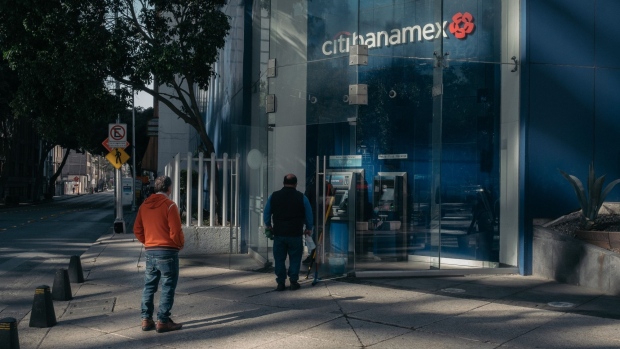 Customers wait in line to use the automatic teller machine (ATM) at a Banco Nacional de Mexico SA (Banamex) Citibanamex bank branch in Mexico City, Mexico, on Wednesday, Jan. 12, 2022. Citigroup Inc. is planning to exit retail-banking operations in Mexico, where it has its largest branch network in the world, as part of Chief Executive Officer Jane Fraser’s continued push to overhaul the firm’s strategy. , Bloomberg

The U.S. bank is preparing to sell its Mexican retail operation, known as Citibanamex, and the fate of the art and heritage pieces owned by its Fomento Cultural Banamex foundation have become the focus of debate. The institution, headquartered in an 18th century baroque palace in Mexico City’s downtown, is one of Mexico’s biggest patrons of arts and culture in the country and manages historical buildings.

“We’re talking about buildings and art collections of the best painters of Mexico and of the world,” AMLO, as the president is known, said at a press briefing on Monday, his first day back in public after recovering from Covid-19. “It’s cultural patrimony, and we’re looking for it to stay in our country.”

The sale of one of Mexico’s oldest banks is testing AMLO’s nationalist impulses since its announcement a week ago, with the president calling for the bank to be acquired by a Mexican investor. On Sunday, Foreign Affairs Minister Marcelo Ebrard proposed on Twitter that the foundation’s collection be turned over to the state, to make up for a 1990s bank bailout that saddled the federal government with debt.

Nevertheless, the president, who has directed his administration to go after tax evaders to boost budget revenue, said that his government would not try to a put a wrench in a sale that could generate a significant sum for state coffers.

“We’re going to look at the legal aspects but we do not want to create problems for the sale or create obstacles, because we want to show that in Mexico there is true rule of law and there are guarantees for investors,” he said.