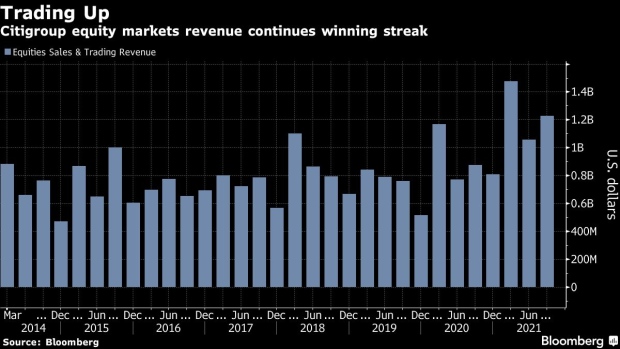 The 40% jump in revenue from stock trading -- a business long overshadowed by rivals’ larger franchises and Citigroup’s own fixed-income division -- pushed the unit’s haul above $1 billion for a third-straight period, it said in a statement.

“The recovery from the pandemic continues to drive corporate and consumer confidence and is creating very active client engagement as you can see through our strong results in investment banking and equity markets,” Chief Executive Officer Jane Fraser said.

That run helped Citigroup generate more revenue than analysts estimated in the three months through September, even as the bank’s credit card unit -- the world’s largest -- struggled to boost lending and the company booked a $680 million charge tied to the sale of its consumer business in Australia.

Under new equities chief Fater Belbachir, Citigroup reorganized the stock trading unit in December as part of a bid to become a top-four player within two to three years. Its $1.23 billion in revenue dwarfed the $909 million estimate from analysts surveyed by Bloomberg. It’s still smaller than franchises at other big U.S. investment banks.

Revenue from trading fixed-income, currencies and commodities didn’t fall as dramatically as analysts predicted, declining 16% to $3.18 billion amid a slump across the industry.

Citigroup, in the midst of selling off retail operations in 12 countries across Asia and Europe, had previously warned it would record a pretax loss on the sale of those operations in Australia. Including that loss, revenue dropped 1% to $17.15 billion -- better than the 2.2% decline estimated by analysts.

While spending on Citigroup’s branded cards rose 24%, card loan balances slipped 3% as consumers continued to pay down their debt. Investors have been on edge this week over mounting competition within the card industry.

Issuers including American Express Co., Discover Financial Services and Capital One Financial Corp. were among the worst performers in the S&P 500 on Tuesday after JPMorgan Chase & Co. said it was spending more to sign up customers.

Expenses in Citigroup’s global consumer banking unit, which includes the costs for the cards business, jumped 7%, which the firm partially attributed to “business-led investments and volume-related expenses.”

Under Fraser, Citigroup has been spending more to overhaul many of its underlying internal controls and risk management systems as part of efforts to satisfy a pair of consent orders from regulators late last year. Overall costs jumped 5% to $11.48 billion, slightly higher than the $11.42 billion average of analyst estimates compiled by Bloomberg.

“We are moving forward with urgency on our top priorities in order to responsibly narrow the returns gap with our peers: the transformation, refreshing our strategy and building a culture of excellence,” Fraser said in the statement.