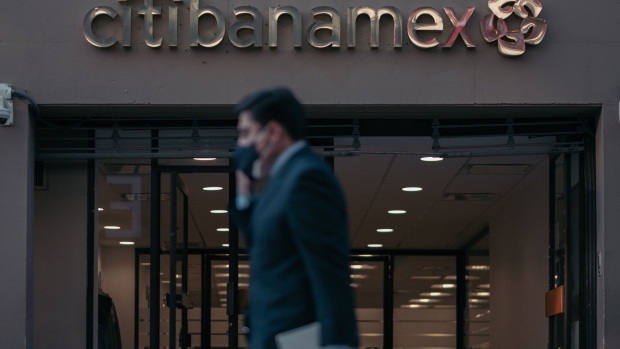 A Banco Nacional de Mexico SA (Banamex) Citibanamex bank branch in Mexico City, Mexico, on Wednesday, Jan. 12, 2022. Citigroup Inc. is planning to exit retail-banking operations in Mexico, where it has its largest branch network in the world, as part of Chief Executive Officer Jane Fraser’s continued push to overhaul the firm’s strategy. , Bloomberg

(Bloomberg) -- Citigroup Inc. is seeking a second and perhaps final round of bids for its Mexican retail arm Banamex by the end of October in what could be one of the year’s biggest banking deals, according to people familiar with the matter.

Banorte and Citigroup declined to comment. Representatives for Inbursa and Larrea didn’t immediately respond to requests for comment.

Citigroup is asking suitors to submit final, binding offers for the next round, signaling the end of the auction process, the people said. It’s possible but unlikely that there will be another round, they said. No final decision has been made and the parties could opt to not proceed with their bids, they added.

Citigroup’s largest branch network in the world is likely to draw bids of $7 billion to $8 billion, Bloomberg News reported last month. At that size, a sale of Banamex would be the second biggest bank deal of the year, behind Toronto-Dominion Bank’s $13.4 billion takeover of First Horizon Corp., according to Bloomberg Data.

At the beginning of the year, Citigroup said it would exit consumer, small-business and middle-market banking in Mexico as part of Chief Executive Officer Jane Fraser’s turnaround of the New York-based lender.

The company plans to continue offering services to large corporations and wealthy clients in Mexico even after the exit and is weighing a deal to buy Deutsche Bank AG’s Mexican bank license to help it do so, people familiar with the matter said in May.

The units included in the intended exit have about $44 billion in assets and take up about $4 billion in average allocated tangible common equity.

Citigroup for months has said the exit could ultimately take the form of a sale or a public-market alternative, and will be subject to regulatory approval. Chief Financial Officer Mark Mason said earlier this month that the company would be able to share more about its progress with the exit process sometime next year.

“We have a lot of interest in it,” Mason said at an investor conference. “I remain very confident that we’ll get a good deal on that and get it in the right hands in the near future.”