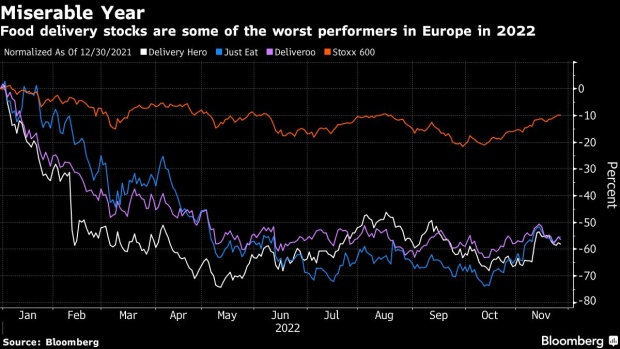 Food delivery couriers for Deliveroo Holdings Plc and Just Eat Takeaway.com NV collect orders from a KFC restaurant in London, U.K., on Wednesday, March 31, 2021. Food-delivery startup Deliveroo Holdings Plc sank as much as 31% in its London debut after its initial public offering raised 1.5 billion pounds ($2.1 billion), putting pressure on the Citys efforts to boost its profile as a technology and listings hub post-Brexit. , Bloomberg

(Bloomberg) -- UK football fans watching the World Cup from the comfort of their sofas could boost delivery firms such as Just Eat Takeaway.com NV and Deliveroo Plc, as many opt to order in food, according to Citigroup Inc. analysts.

The World Cup should support orders for food delivery in the fourth quarter, “at least in the UK market, with the vast majority of people indicating that they’ll watch most matches from home and a high proportion planning to order takeaway,” analysts led by Catherine O’Neill wrote in a report. Other European countries should see similar trends too, they said.

O’Neill referenced a recent Bloomberg Intelligence survey of 650 British respondents, which found that more than three quarters of those planning to watch some World Cup matches would mainly tune in from home. Of that number, about 57% said they’d be munching on takeaway food as they enjoy the sporting spectacle.

The survey results show the World Cup may fuel food delivery orders, especially for Just Eat and Deliveroo, which have large exposure to European markets, according to Citigroup. Wall Street analysts have anticipated a tough quarter for both firms, with their orders predicted to decline as consumers assailed by a cost-of-living crisis rein in spending.

The impact of the World Cup on competitor Delivery Hero SE looks more nuanced, with Latin American clients often choosing to fire up their barbecues at home while they watch sports, the analysts said.

However, its Middle East and North Africa arm might benefit with the event being held in Qatar. The company has assumed no material top-line boost from the World Cup, the analysts said.

Food delivery stocks have been some of the worst performers in Europe this year, with investors turned off by their steep losses at a time when borrowing costs are soaring.

Meanwhile, their growth has suffered as pandemic-fueled sales faded and the companies pared back promotions. Shares of Just Eat, Delivery Hero and Deliveroo are all down by more than half this year.