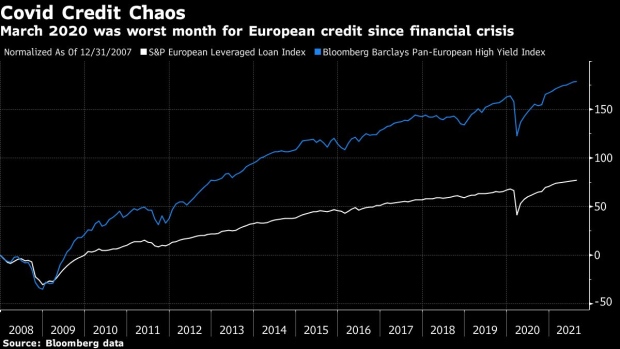 (Bloomberg) -- Citigroup Inc. is facing a lawsuit for pulling support from a European credit fund as the Covid-19 pandemic roiled the markets, then giving its own traders a potential profit at the fund’s expense.

The New York-based bank was sued by Ver Capital Partners in London for forcing the fund to default on a 224 million-euro ($263 million) loan in March 2020 and selling linked assets to its trading desk. This liquidation process created a conflict of interest at the bank, while ignoring the chance of better offers from other possible buyers and leaving the fund further out of pocket, Ver said in a legal filing.

Citigroup undervalued the assets it sold to the traders, acting “with the intention of generating a profit for itself” at the expense of “the best price reasonably obtainable,” Ver’s lawyers said in the filing made available last week.

The dispute is a window into the chaos that coursed through financial markets as Covid-19 upended the global economy, leaving firms and regulators racing to contain turmoil that spanned from international money markets to small business loans.

The Ver fund, managed by Milan-based Ver Capital, was among investors that piled into riskier debt issued by European corporations in the years leading up to the pandemic, attracted by their returns in an era of rock-bottom interest rates. Citigroup agreed to finance the firm’s bets on leveraged loans -- high-yield debts often used in mergers and acquisitions -- and increased the size of its facility three-fold by the end of February, according to the claim.

Although leveraged loans had steadily gained in value over the prior decade, that run came to a shuddering halt in March 2020, the worst single month for European high-yield credit assets since the financial crisis. Investors that had used borrowed money for their bets found themselves facing requests for repayment and often had to sell off assets at depressed prices in a bid to avoid default.

As the turmoil in the loan market grew, Ver sold assets for a total of 78.5 million euros, according to the claim. But it wasn’t enough. On March 24, Citigroup managing director Cristina Paviglianiti emailed Ver to announce that the lender intended to enforce against the remaining collateral tied to the loan.

Staff at the fund were concerned about the sale process, exchanging a flurry of online messages with the bank over whether they would achieve “a good price”, according to the claim. “As discussed we do not want to wait,” a member of Citi’s credit team replied.

On the same days Citi orchestrated the sale of Ver’s assets, trading data showed that there were higher bids available for 36 out of the 37 assets, according to the claim. Citi’s bid was the lowest in the overwhelming majority of cases, the fund said.

Citigroup continued to sell assets until an unidentified Ver investor put in additional funds to repay the remaining portion of the facility, the fund said.